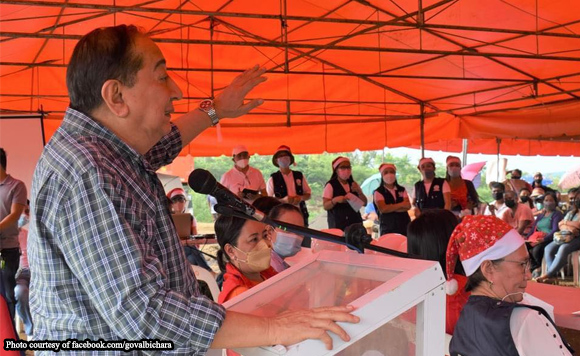 0 618
Share
Want more POLITIKO News? Get the latest newsfeed here. We publish dozens and dozens of politics-only news stories every hour. Click here to get to know more about your politiko - from trivial to crucial. it's our commitment to tell their stories. We follow your favorite POLITIKO like they are rockstars. If you are the politiko, always remember, your side is always our story. Read more. Find out more. Get the latest news here before it spreads on social media. Follow and bookmark this link. https://goo.gl/SvY8Kr

A total of 213 households from three barangays in Guinobatan, Albay were awarded a house and lot at the resettlement site developed by the Provincial Government of Albay.

“You’re going to live in a first-class subdivision,” Albay Gov. Al Francis Bichara said in his message to the beneficiaries during the awarding ceremony held at the resettlement site in Barangay Bululusan, Guinobatan.

The beneficiaries were households and families from the barangays of San Rafael, Travesia, and San Francisco.

According to the Capitol, most of the beneficiaries were victims of the heavy onslaught of four typhoons that hit Albay in November last year.

Temporarily, the homeless typhoon victims were made to stay at a jam-packed evacuation center quickly made ready by Guinobatan Mayor Ann Gemma Y. Ongjoco and the MDRRMC for long months.

Bichara, after winning the 2016 election, had envisioned to create the Provincial Home Settlement Office (PHSO) mainly to help homeless to get house and lots.

The newly-created PHSO is headed by PGDH Engr. Gina Paz E. Sipin. She led the identification of all the beneficiaries.

The selection of the home and lot beneficiaries took the PHSO several months of planning, research work, evaluation, selection, and interview before the list of the beneficiaries were finalized and approved.