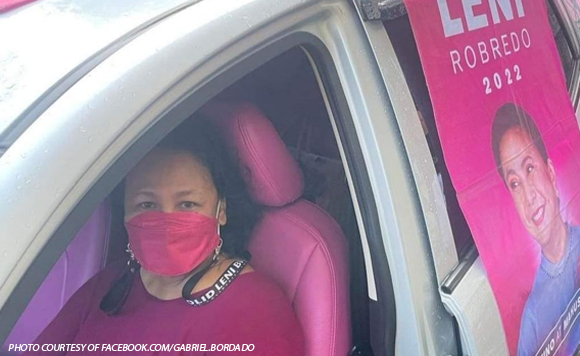 0 844
Share
Want more POLITIKO News? Get the latest newsfeed here. We publish dozens and dozens of politics-only news stories every hour. Click here to get to know more about your politiko - from trivial to crucial. it's our commitment to tell their stories. We follow your favorite POLITIKO like they are rockstars. If you are the politiko, always remember, your side is always our story. Read more. Find out more. Get the latest news here before it spreads on social media. Follow and bookmark this link. https://goo.gl/SvY8Kr

Camarines Sur Rep. Gabriel Bordado Jr.’s wife Gina refrained from joining overtly political activities as a teacher and president of the Central Bicol State University of Agriculture, despite being married to a politiko.

But now that Gina is retired, she has shown her political colors and is a proud kakampink, of course, said Bordado.

In a Facebook post, Bordado said Gina is determined to campaign for her kumare Vice President Leni Robredo as president.

Gina even joined an early morning caravan for Robredo in Pili where she came face to face with BBM supporters, he said.

In the Bordado household, pink rules!

“OF COURSE, GINA WILL ALWAYS BE FOR VP LENI: Despite my long-standing political career, my wife Gina Georgina Bordado never bothered to engage in any overt activity supporting me or my partymates while teaching at (and eventually becoming president of) the Central Bicol State University of Agriculture (CBSUA). But now that she has retired from the academe, Gina is really keen on campaigning for her kumadre, Vice President Leni Gerona Robredo (both were born on April 23)–even up to the point of joining an early-morning ‘pink’ caravan in her hometown of Pili where she came face-to-face with BBM supporters!