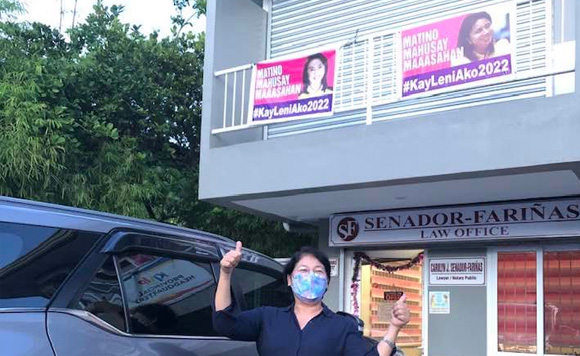 0 481
Share
Want more POLITIKO News? Get the latest newsfeed here. We publish dozens and dozens of politics-only news stories every hour. Click here to get to know more about your politiko - from trivial to crucial. it's our commitment to tell their stories. We follow your favorite POLITIKO like they are rockstars. If you are the politiko, always remember, your side is always our story. Read more. Find out more. Get the latest news here before it spreads on social media. Follow and bookmark this link. https://goo.gl/SvY8Kr

Naga Councilor Mila Raquid Arroyo is gathering support for her presidential candidate Vice President Leni Robredo, and was happy to find a fellow kakampink in her friend.

In a Facebook post, Arroyo shared that she went to see her friend, former San Felipe, Zambales Mayor Caroline Senador-Fariñas, to get her to join the campaign for Robredo.

But upon arrival in Fariñas law office, she found tarpaulins supporting Robredo.

It was happy news for her, as it meant she’d no longer have to convince her friend to join the cause.

Arroyo shared that Fariñas was one of the mayors whom the late Jesse Robredo had invited to the Kaya Natin Movement for replication of good governance practices in different local governments in the country.

She has also been a Galing Pook Awardee.

Fariñas is also running for mayor again and will be supporting Robredo’s campaign.

Arroyo wished her well in her bid.

Their brand of leadership deserves a chance!