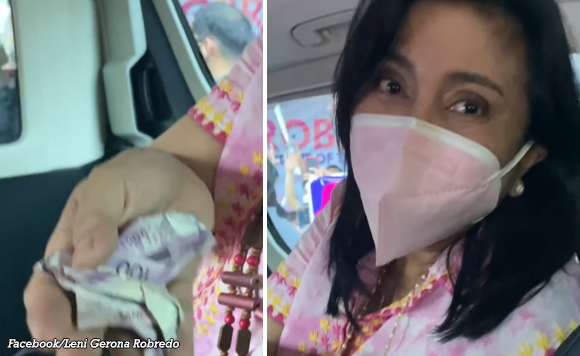 0 1,119
Share
Want more POLITIKO News? Get the latest newsfeed here. We publish dozens and dozens of politics-only news stories every hour. Click here to get to know more about your politiko - from trivial to crucial. it's our commitment to tell their stories. We follow your favorite POLITIKO like they are rockstars. If you are the politiko, always remember, your side is always our story. Read more. Find out more. Get the latest news here before it spreads on social media. Follow and bookmark this link. https://goo.gl/SvY8Kr

Vice President Leni Robredo is very touched by the actions of the people who want to support her campaign.

In a Facebook post, Robredo shared that during a visit to Tarlac where she delivered a speech, a lot of people came up on stage to have their photos taken with her.

One of them took her hand and pressed something into it.

The woman said it was from her daughter, who wanted to give the Vice President her school allowance to help her.

Because it was crowded, she was only able to glance at what was in her hand when she got back to her vehicle.

It turned out that the student gave her two P100 bills.

It was a very touching gesture, she said.

She was unable to get the name of the woman or the student who gave her the money.

She hoped that whoever it was would post the name on Facebook so that she could thank the student personally.

She really appreciates the help!