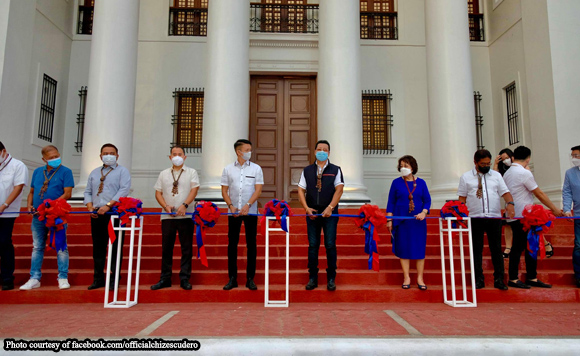 0 378
Share
Want more POLITIKO News? Get the latest newsfeed here. We publish dozens and dozens of politics-only news stories every hour. Click here to get to know more about your politiko - from trivial to crucial. it's our commitment to tell their stories. We follow your favorite POLITIKO like they are rockstars. If you are the politiko, always remember, your side is always our story. Read more. Find out more. Get the latest news here before it spreads on social media. Follow and bookmark this link. https://goo.gl/SvY8Kr

Sorsogon Governor Francis “Chiz” Escudero spearheaded the blessing and inauguration of the Provincial Capitol Building, which has been restored and renovated to its original architectural plan when it was built in 1916.

“I officially declare that the People’s Capitol is now open to serve all Sorsoganons. This is your building, our building,” said Escudero.

The senatorial aspirant also urged Sorsoganons to help in maintaining the beauty of the structure and the entire complex that the future generations of Sorsoganon will enjoy and love.

“It is my hope that future governors of this province will hold it in their hearts what this century-old buildings stands for, mabuting pamahalaan at tunay na serbisyo publiko para sa ating mga ka-probinsya,” he pointed out.

The Capitol was erected in 1916 during the time of Gov. Victor Eco. However, the provincial capitol building was never completed based on its original design until Escudero took office as governor.

Escudero is seeking a Senate comeback in the 2022 polls, which means that this is his first and last term as Governor

Gov. Velasco provides assistance to Marinduquenos who were…