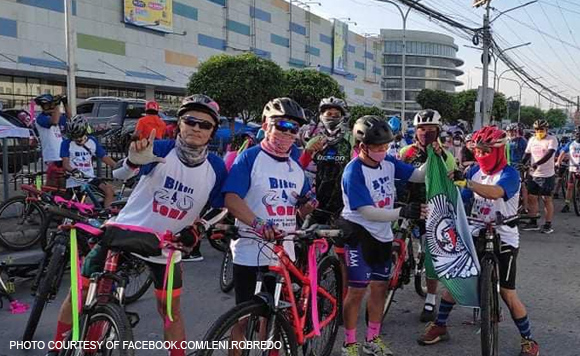 0 377
Share
Want more POLITIKO News? Get the latest newsfeed here. We publish dozens and dozens of politics-only news stories every hour. Click here to get to know more about your politiko - from trivial to crucial. it's our commitment to tell their stories. We follow your favorite POLITIKO like they are rockstars. If you are the politiko, always remember, your side is always our story. Read more. Find out more. Get the latest news here before it spreads on social media. Follow and bookmark this link. https://goo.gl/SvY8Kr

Vice President Leni Robredo was touched by the show of support by her fellow Bicolanos for her presidential bid.

In a Facebook post, Robredo said she has seen photos of the pink caravan they held in Bicol and was overwhelmed by what she had seen.

People from Albay, Camarines Sur, Camarines Norte, Masbate, Sorsogon, and Catanduanes were among those who joined the activities, which were all volunteer-driven.

She thanked the Solid Leni Bicol, UP Alumni Assiciation and the other groups who spearheaded this event for her.

Her bid for the presidency will really be a people’s campaign, she said.

“Been receiving pictures of a Pink Caravan in Bicol and I am overwhelmed by the show of tremendous support. Saw pictures na from Albay, Camarines Sur, Camarines Norte, Masbate, Sorsogon and all of the activities are volunteer-driven. Still checking if Catanduanes also joined. Thank you to Solid Leni Bicol, UP Alumni Assiciation and all the other groups who spearheaded this event. Will post more pictures later. (P.S. Was just informed that Catanduanes also joine. Yay!! Motorcade in Virac and Bato