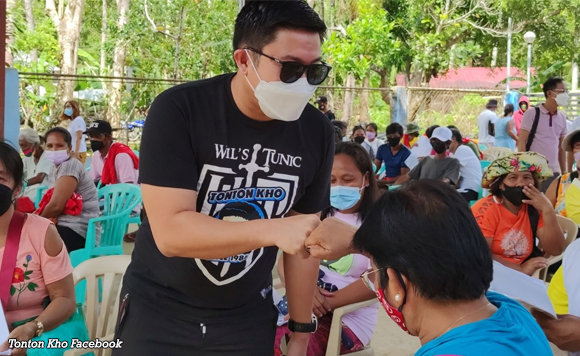 Masbate Rep. Tonton Kho has recently spearheaded the distribution of cash assistance to families affected by Typhoon Jolina in Dimasalang.

Masbate was one of the provinces heavily affected by Tropical Cyclone Wind Signal (TCWS) No. 3. Typhoon “Jolina.”

It has made landfall over the 3rd district of Masbate on September 7, leaving major damages to the households of Masbateños.

“The aftermath which are particularly visible in the coastal areas awaken the heart of Senator Bong Go and prompted him to provide cash assistance to the affected families,” Kho’s office said.

The LGU Dimsalang headed by Mayor Michael Demph Du Naga led the occasion inn cooperation with the Department of Social Welfare and Development (DSWD) and through the Office of Congressman Wilton T. Kho.

“There were about 268 families who received the said assistance. This will be helpful for them to start anew and cope with these trying times. Personal Hygiene kits were also distributed to families through the able Governor Antonio Kho,” the lawmaker’s office said.

Meanwhile, other municipalities in the 3rd District will also be given cash assistance as soon as the DSWD finishes its validation in the affected areas.

“Confronted by these challenges and difficulties, we, as officials of our nation, always listen to the needy ones and provide any kind of assistance— a true meaning of public service,” the solon’s office said.