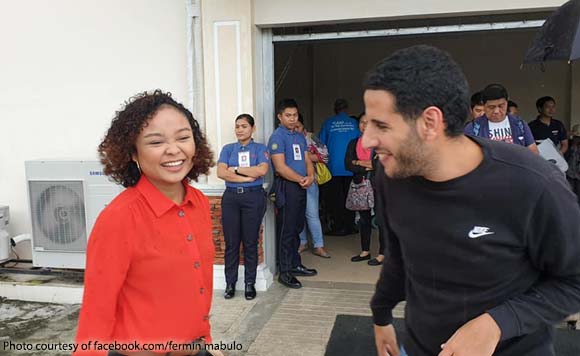 0 282
Share
Want more POLITIKO News? Get the latest newsfeed here. We publish dozens and dozens of politics-only news stories every hour. Click here to get to know more about your politiko - from trivial to crucial. it's our commitment to tell their stories. We follow your favorite POLITIKO like they are rockstars. If you are the politiko, always remember, your side is always our story. Read more. Find out more. Get the latest news here before it spreads on social media. Follow and bookmark this link. https://goo.gl/SvY8Kr

San Fernando Mayor Fermin Mabulo’s daughter Louise has been drawn into the fray over the actions of online content creator Nuseir Yassin of Nas daily, and the politiko has backed her up in the issue.

In a Facebook post, Mabulo shared his own experience with Nuseir and supported Louise’s account of his lack of genuine interest in her cacao project and the plight of Filipino farmers when he came to interview her.

Louise had spoken up when Nuseir was accused of taking advantage of tattoo master Apo Whang-Od by offering tattoo workshops using her name.

The Nas Daily page responded by saying that Louise’s project that reportedly “revolutionised the cacao industry in your province” was not true on the ground.

In his own post, the mayor said he hosted Nuseir when he came to interview Louise.

He said Nuseir had a script in mind for Louise’s cacao farm project and wanted to present her as “The Chocolate Lady from the Philippines,” but she told him the concept he had in mind was not consistent with the reality on the ground because she was still propagating the cacao trees.

Louise also wanted to highlight the farmers instead of just herself, but the vlogger supposedly told her,” who cares about the farmers?”

This was when they lost interest in the vlogger, Mabulo said.

The mayor said that after this, they packed up and had Nuseir brought back to his hotel.

He and his daughter unfollowed him after that.

He said Nuseir was “full of himself and he was arrogant,” and is not exactly a role model for the youth.

Will you be influenced by this influencer?

“As a father i cannot take this sitting down…

This is really what happened:

In October of 2019, My daughter Louise De Guzman Mabulo received a phone call from a man who introduced himself as Nussier of Nas Daily. He was asking if he could feature Louise in his Vlog. Louise asked what he wanted to show since her venture is still just starting, her cacao trees are still on a flowering stage and we have nothing much to show. He said he needed content so he insisted on coming over and since we were then huge fans of his daily videos, we agreed for him to come over.

We picked him up at the airport and checked him and his companion in at the Avenue Plaza Hotel.

During breakfast at the hotel, Nas was busy trying to come up with a script on how to present his content. Louise told him to see the farm first because his script may not be consistent with the reality on the ground.

Nas wanted to present the Vlog in such a way that it will garner the most views, likes and shares. He even said that anything he posts with Philippines in it is sure to get at least a million likes. So he thought of presenting Louise as The Chocolate Lady from the Philippines.

But Louise said her venture is not yet at that stage. Were still in the process of propagating the cacao trees. The content he wanted is still few years in the making.

Louise wanted to highlight the farmers and not just herself. But Nas said ‘who cares about the farmers?’ Thats when we lost interest in the whole thing that hes trying to do. His intended content is inconsistent with the realities on the ground. We were very transparent about what we showed him but he was looking for something else.

So we packed up and i told our driver to bring them back to the hotel.

We never heard from him since because we unfollowed him. He was full of himself and he was arrogant. Not exactly a role model for the young people to emulate.