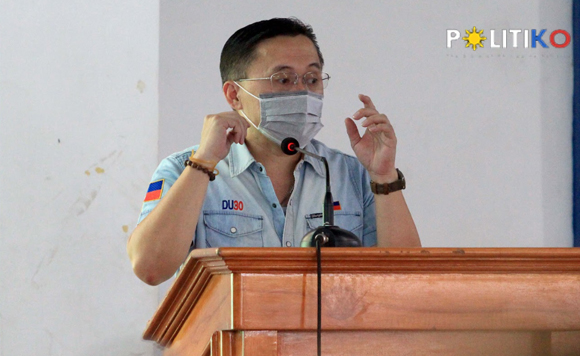 0 169
Share
Want more POLITIKO News? Get the latest newsfeed here. We publish dozens and dozens of politics-only news stories every hour. Click here to get to know more about your politiko - from trivial to crucial. it's our commitment to tell their stories. We follow your favorite POLITIKO like they are rockstars. If you are the politiko, always remember, your side is always our story. Read more. Find out more. Get the latest news here before it spreads on social media. Follow and bookmark this link. https://goo.gl/SvY8Kr

Senator Christopher “Bong” Go congratulated the people of Masbate province for the launch of the country’s 122nd Malasakit Center held at the Masbate Provincial Hospital in Masbate City, on Monday, June 28.

Go personally attended the activity as part of his continued commitment to improving access to and delivery of public health services.

This is the first Malasakit Center in the province and fourth in the Bicol region, in addition to those at the Dr. Fernando B. Duran, Sr. Memorial Hospital in Sorsogon City, Bicol Regional Training and Teaching Hospital in Legazpi City, and Bicol Medical Center in Naga City.

In his remarks, Go spoke of his untiring commitment for helping indigent patients which began when he was still working under then-mayor Rodrigo Duterte in Davao City. There, he saw firsthand many of the barriers to healthcare experienced by patients living in rural and low-income communities.

The Malasakit Center is a one-stop shop where particularly poor and indigent patients may conveniently avail of the medical assistance programs offered by various government agencies. The partner agencies are the Department of Health, Department of Social Welfare and Development, Philippine Health Insurance Corporation, and Philippine Charity Sweepstakes Office.

After the ceremony, the Senator’s team handed out meals, food packs, vitamins, masks and face shields to a total of 375 medical frontliners. They gave selected recipients new shoes or bicycles for their daily commute or computer tablets for their children to use in school.

In addition, personnel from the DSWD distributed financial assistance to 246 rank-and-file employees. The same forms of aid were likewise extended to 105 patients.

Go thanked various public officials for their efforts to improve the delivery of health services in Masbate.