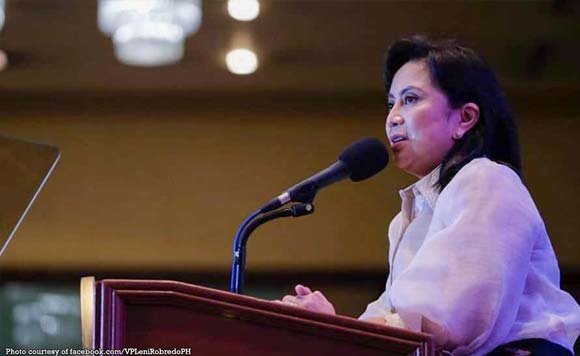 0 284
Share
Want more POLITIKO News? Get the latest newsfeed here. We publish dozens and dozens of politics-only news stories every hour. Click here to get to know more about your politiko - from trivial to crucial. it's our commitment to tell their stories. We follow your favorite POLITIKO like they are rockstars. If you are the politiko, always remember, your side is always our story. Read more. Find out more. Get the latest news here before it spreads on social media. Follow and bookmark this link. https://goo.gl/SvY8Kr

Those who want Vice President Leni Robredo to run for President better start speaking up.

In a Facebook post, Naga Councilor Mila Raquid Arroyo said Robredo is the President the country needs, but she will only seek the post if those who believe in a transparent, participatory, responsive, and accountable government would let her know that she has their support.

Arroyo invited those who agree with her to like her post to manifest their support for a Robredo presidency.

It would also be considered their personnel commitment that they would do their best to achieve this kind of government, she said.

“VP Leni Robredo – the President our country truly needs – will seek the Presidency only if all those who truly believe that government should be transparent, participatory, responsive, and accountable speak out now and tell her that she has their support in leading us to achieve that kind of government.

If you are that person, please like this post. Your liking this post will manifest our support for her and our own personal commitment that we, together with VP Leni as the Predident of this country, will give our best to achieve that kind of government.

Let us declare the true friendship that exists in facebook,” Arroyo posted.