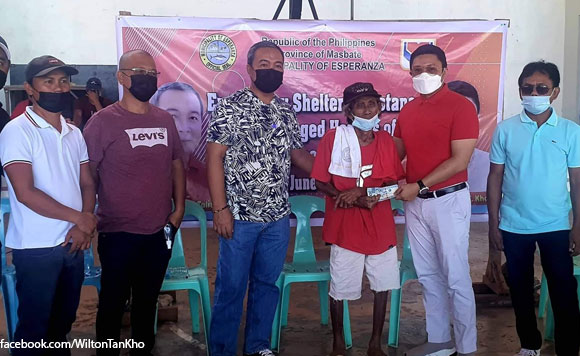 0 139
Share
Want more POLITIKO News? Get the latest newsfeed here. We publish dozens and dozens of politics-only news stories every hour. Click here to get to know more about your politiko - from trivial to crucial. it's our commitment to tell their stories. We follow your favorite POLITIKO like they are rockstars. If you are the politiko, always remember, your side is always our story. Read more. Find out more. Get the latest news here before it spreads on social media. Follow and bookmark this link. https://goo.gl/SvY8Kr

Masbate Rep. Wilton Kho has spearheaded the distribution of cash assistance to families who were deeply affected by the recent onslaught of Typhoon Dante.

“Natural calamities are situations people have no control over. In early June this year, a tropical storm has hit the southern tip of Masbate, particularly in the Municipality of Esperanza, which devastated many houses leaving the people almost homeless,” thw lawmaker’s office said.

The distribution of cash assistance to the affected families was made possible through the funds of Congressman Wilton T. Kho.

The distribution was was administered by DSWD and LGU-Esperanza headed by Mayor Fernando Talisic.

The event was organized by the Office of Congressman, its staffs, DSWD personnel and LGU-Esperanza.

“In times like this, the people should always be our priority and should be given good service to lessen their burden,” Kho’s office said.

“We will do our best to proliferate our service no matter what!,” it added