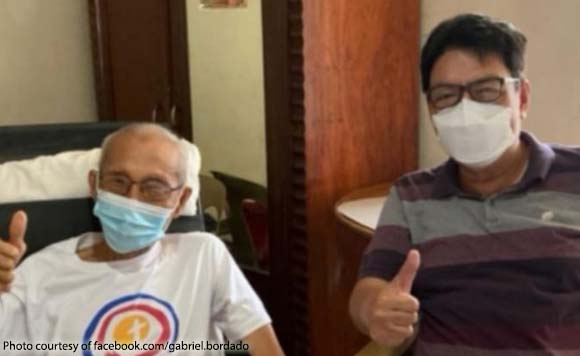 0 273
Share
Want more POLITIKO News? Get the latest newsfeed here. We publish dozens and dozens of politics-only news stories every hour. Click here to get to know more about your politiko - from trivial to crucial. it's our commitment to tell their stories. We follow your favorite POLITIKO like they are rockstars. If you are the politiko, always remember, your side is always our story. Read more. Find out more. Get the latest news here before it spreads on social media. Follow and bookmark this link. https://goo.gl/SvY8Kr

The son’s achievement is also the father’s honor.

The lawmaker said his uncle never expected his son to become Navy chief, and Adeluis himself said he had only aspired to be the superintendent of the Philippine Military Academy to honor his late mother Herminia Santelices Bordado, who had been a long time teacher.

But it looks like greater things were in store for Adeluis as he is now commanding the country’s naval force.

His success makes the family proud!

“FATHER OF THE PHILIPPINE NAVY’S TOP GUN: I congratulated Victorino “Tata Bitong” Bordado– the father of the new Philippine Navy chief. A former municipal postmaster of Calabanga, Tata Bitong (the youngest brother of my father Gabriel) never expected his son to get the navy’s top post. Rear Admiral Adeluis Bordado himself admitted that he just aspired to be the superintendent of his alma mater, the Philippine Military Academy, in order to honor his late mother Herminia Santelices Bordado who was a long-time teacher (she was, in fact, my Grade 2 mentor) at the Calabanga Central Division Pilot School,” Bordado posted.