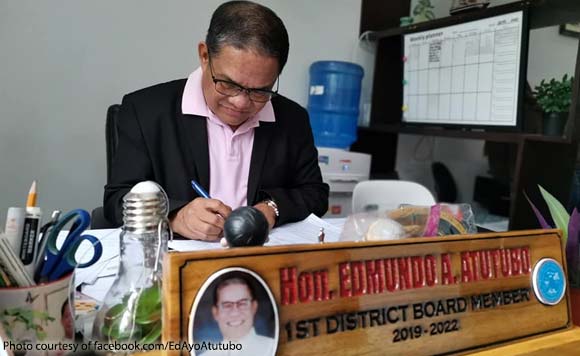 0 169
Share
Want more POLITIKO News? Get the latest newsfeed here. We publish dozens and dozens of politics-only news stories every hour. Click here to get to know more about your politiko - from trivial to crucial. it's our commitment to tell their stories. We follow your favorite POLITIKO like they are rockstars. If you are the politiko, always remember, your side is always our story. Read more. Find out more. Get the latest news here before it spreads on social media. Follow and bookmark this link. https://goo.gl/SvY8Kr

In a Facebook post, Atutubo celebrated his triumph over the disease as he talked about his journey with it.

He said he got infected when he attended to his friend Board Member Johnny Guysayko when the latter’s temperature was increasing.

They did not know that Guysayko was already positive at that time.

The following day, Atutubo said he started experiencing symptoms and had to be confined at the hospital.

But even when his oxygen levels fell, death was not on his mind, he said.

He thanked all the people who cared for him and sent their prayers and support, including the Sorsogon officials who reached out to him.

He also expressed gratitude to the doctors who attend to him and sent him words of encouragement.

For those who are still battling the disease, he prayed for them and their families to be given the power to come out of the experience stronger.

“Today I celebrate my triumph against Covid19.

I was first inflicted with the virus when I attended to BM Johnny Guysayko—a dear friend and father figure—when I found him at the verranda of the SP building with BM Art Enano. He was then experiencing a sudden increase in temperature following the Irosin issue, and we had to call 911 to bring him to the hospital. Unbeknownst to us, he was already positive that time.

The rest of the day went by normally. We even had an executive meeting and the regular SP session. The next day wasn’t as fortunate. I started manifesting symptoms and I had to be confined at Metrohealth Specialist Hospital. Even at my hardest days, and even to the point of my oxygen level dropping to 88%, death has never crossed my mind. I was assured that I am surrounded by people who care for me.

And for this, I would like to take this opportunity to thank you all for the support and prayers you have offered for me and my family.

First, to the almighty God, who has never once left my side and has always made his presence felt—be it in the daily masses I watched on line or the prayers I offered daily. You, Lord, are the source of all miracles.

To the skilled medical doctors who attended to me, most especially Dr. Edwin Tan, who even scolded me for being very stubborn. I am thankful not just for your expertise, but for the care you have showed me while I was in confinement. Your little words of encouragement made my fight a little more bearable.

To my dear friend, Mayor Boboy Hamor, who became a source of strength despite the challenging situation. Thank you for assuring me that everything will be okay. I commit my full loyalty to you as we work for your vision for the Province! A million thank yous would not be enough.

To Governor Chiz, who also took time to call, to see how I was recovering; and VG Wowo—who, despite testing positive as well—still managed to reach out to send comforting messages. Our friendship has stood for decades, and will stand strong for decades more.

And to all those who sent in messages of concern and prayers..you have all contributed to my complete healing. I am forever in debt to all of you.

For all those who have been inflicted and those who are still battling Covid19, may God grant you and your families the power to come out of this stronger.