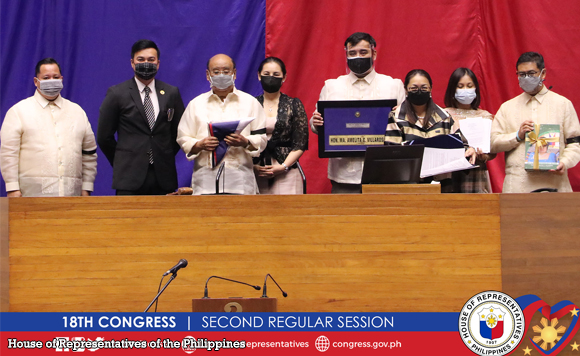 0 86
Share
Want more POLITIKO News? Get the latest newsfeed here. We publish dozens and dozens of politics-only news stories every hour. Click here to get to know more about your politiko - from trivial to crucial. it's our commitment to tell their stories. We follow your favorite POLITIKO like they are rockstars. If you are the politiko, always remember, your side is always our story. Read more. Find out more. Get the latest news here before it spreads on social media. Follow and bookmark this link. https://goo.gl/SvY8Kr

Speaker Lord Allan Velasco on Monday led the House of Representatives in paying tribute to the late Occidental Mindoro Rep. Ma. Amelita “Girlie” Calimbas-Villarosa during a necrological service held at the session hall inside the Batasang Pambansa.

Villarosa died of aneurysm while undergoing treatment at a hospital in Metro Manila on May 30, the day she marked her 78th birth anniversary.

Villarosa served as representative of the lone district of Occidental Mindoro in the 11th, 13th, 14th and 15th Congresses. She was elected Deputy Speaker during the 14th Congress.

The House chief praised Villarosa for strengthening the institution of the Girls Scouts of the Philippines to empower girls of whatever age, and for introducing the Pantawid Pamilyang Pilipino Program (4Ps) or the conditional cash transfer program, which is now one of the government’s landmark poverty alleviation and welfare initiatives.

He also hailed Villarosa as a “tireless advocate for tourism of her beloved province of Occidental Mindoro,” having helped set up the Apo Reef Natural Park and put Apo Reef, the world’s second-largest contiguous coral reef system and the largest in the country, as a top diving destination in the world.

“Smart, motherly, and yet determined and fierce as a tamaraw, Tita Girlie, as Deputy Speaker of the House, made sure that the legislative mill of the 13th, 15th, and especially, the 14th Congresses continued to grind, despite any political and economic disorder,” Velasco said.

“A consensus-builder, she coaxed, mentored, and helped lawmakers pass many laws we enjoy today. More importantly, she empowered other women legislators to assert their own voices within these august halls traditionally dominated by strong-willed men,” added Velasco.

Towards the end of the necrological service, Speaker Velasco presented to the Villarosa family a legislative memorabilia containing House Resolution No. 182, which the chamber adopted before it adjourned sine die on June 2.