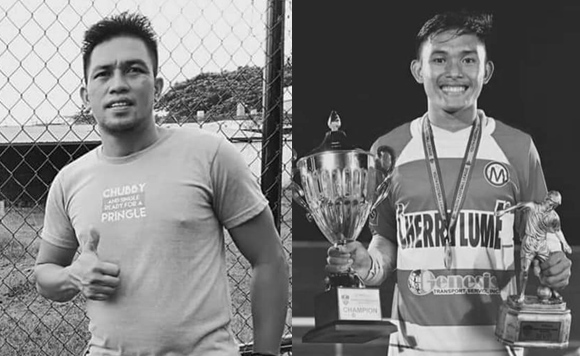 0 301
Share
Want more POLITIKO News? Get the latest newsfeed here. We publish dozens and dozens of politics-only news stories every hour. Click here to get to know more about your politiko - from trivial to crucial. it's our commitment to tell their stories. We follow your favorite POLITIKO like they are rockstars. If you are the politiko, always remember, your side is always our story. Read more. Find out more. Get the latest news here before it spreads on social media. Follow and bookmark this link. https://goo.gl/SvY8Kr

Masbate Senior Provincial Board Member Jason Arevalo mourned the untimely death of two Masbateño young men after an improvised explosive device exploded while they were biking.

One of those who perished was promising football player from Far Eastern University, Kieth Absalon. He was once awarded as most valuable player in the UAAP.

The other one who died was Keith’s cousin Nolven Absalon.

“I don’t know these young men personally [except for tiny bits of info of one of the two dead being a multi-awarded Masbateno football player] but my heart is broken. It bleeds for the great promise they could have been and for the families and loved ones they have left behind,” said Arevalo.

“Such senseless and dastardly act to plant mines on the road where innocent by-passers could get maimed or killed! Are we that mindless and ruthless for what the consequences could be? Have we ever thought it could be our own who might fall victim to our senselessness and reckless pursuits? Where are your consciences!,” he added.

“These people are not collateral damage. These are victims of your lack of good sense and humanity,” he said.

“We pray for justice for Noven and Keith and for the other one seriously wounded. Even as we pray to God for an end to senseless violence irrespective of which side of the ideological or political continuum the culprits come. No one has the right to play God. Much less play darn stupid and cause the death of innocent ones,” Arevalo concluded.