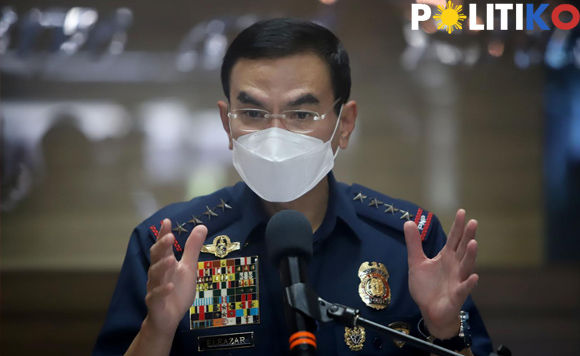 0 24
Share
Want more POLITIKO News? Get the latest newsfeed here. We publish dozens and dozens of politics-only news stories every hour. Click here to get to know more about your politiko - from trivial to crucial. it's our commitment to tell their stories. We follow your favorite POLITIKO like they are rockstars. If you are the politiko, always remember, your side is always our story. Read more. Find out more. Get the latest news here before it spreads on social media. Follow and bookmark this link. https://goo.gl/SvY8Kr

Nine other policemen were wounded in the incident, six of them are still undergoing treatment while three others were already discharged.

Eleazar personally visited the cops yesterday in Occidental Mindoro to award the Medalya ng Kadakilaan to the 12 of the 14 PNP personnel who engaged the communist rebels, including the three policemen who died and two other policemen who survived the attack unharmed.

The two other PNP personnel, who were earlier airlifted and are currently undergoing treatment at the PNP General Hospital at Camp Crame in Quezon City, also received the Medalya ng Kadakilaan from Eleazar as soon he arrived from Occidental Mindoro.

Aside from Medalya ng Kadakilaan, the Medalya ng Sugatang Magiting were also given to the nine wounded PNP personnel, including the two policemen who are at the PNP General Hospital.

Based on initial information, personnel from the Occidental Mindoro Provincial Mobile Force Company were able to repel members of the New People’s Army (NPA) who ambushed their unit at 10:30 AM Friday in Sitio Banban in Barangay San Nicolas, while they were securing a caravan that had just delivered aid to a remote barangay in the province.

“We strongly condemn this latest atrocity perpetrated by the communist terrorists in Occidental Mindoro. These terrorists really do not know the concepts of peace and humanity as even in this time of a public health emergency, they continue their cowardly attacks against state forces and even innocent civilians,” Eleazar said.

According to the PNP Chief, “These communist terrorists ambushed our PNP personnel escorting the governor’s convoy that just delivered much needed relief and aid to a remote community in the province.”

Eleazar expressed deep sympathy for the bereaved family of the three policemen, promising justice for the policemen’s death.

“Sinisiguro ko sa kanilang pamilya na mabibigyan ng hustisya ang pagkamatay nila. The PNP is now coordinating with them to extend all assistance in this difficult time. The PNP will also provide for the needs of our 10 personnel who bravely fought to repel the communist terrorists and were wounded,” he added.