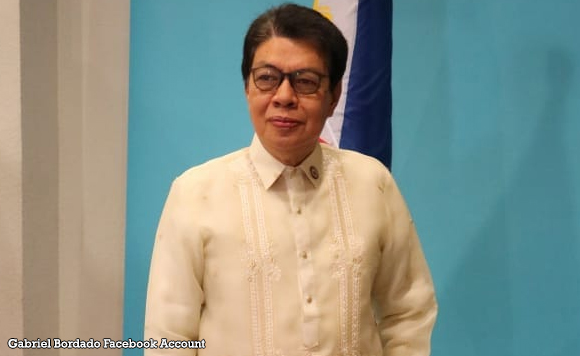 0 31
Share
Want more POLITIKO News? Get the latest newsfeed here. We publish dozens and dozens of politics-only news stories every hour. Click here to get to know more about your politiko - from trivial to crucial. it's our commitment to tell their stories. We follow your favorite POLITIKO like they are rockstars. If you are the politiko, always remember, your side is always our story. Read more. Find out more. Get the latest news here before it spreads on social media. Follow and bookmark this link. https://goo.gl/SvY8Kr

Camarines Sur Rep. Gabriel Bordado has expressed reservation on a resolution seeking to amend the “restrictive” economic provisions of the 1987 Constitution.

In a manifestation on Charter change, Bordado expressed apprehension on the manner by which the House of Representatives is proceeding with the constitutional amendments, which according to him, is different from the one envisioned by the Senate.

“The proposed Resolution emanating from the House of Representatives is going through the normal legislative process with the specific amendments now being discussed at the plenary while that of the Senate is just seeking to convene the 18th Congress as a constituent assembly, without any specific amendment being mentioned,” he said.

“I am of the view that discussion on any specific amendment should proceed only when Congress convenes as a Constituent Assembly,” he added.

The CamSur solon also asked if the House version should view the economic provisions as “restrictions” rather than “safeguards.”

“The provisions sought to be amended pertain to economic safeguards based on the principle of pursuing economic development by Filipinos for Filipinos,” said Bordado.

“Opening land ownership to foreigners and expanding foreign equity in corporations allowed to engage in certain business activities means the contraction of investment opportunities for Filipinos. It also means losing ownership over tracts of land which might no longer be recovered from foreign ownership.”

He also said that the proposed amendments favor the entry of foreign capital as if it is the best option of pursuing national economic development.

“We have not even pursued the option of the State directly undertaking, entering into co-production, joint venture or production-sharing agreements with Filipino citizens for the exploration, development, and utilization of our natural resources for our economic development,” he said.

“This is explicitly provided for in the same provisions of the constitution that some quarters wish to amend,” he added.

Bordado also flagged the timing of the constitutional amendments as it comes at a time when the Congress need to address the growing anxiety of the people over the uncertainty brought about by the pandemic.

“We need to create more jobs in the countryside where most of our people reside. Foreign investors will not be interested in our far-flung areas, but only in areas where the investment climate and infrastructure are ready for their capital,” he said.

“The agricultural sector can spur economic development in our rural areas if the government plows more resources or provides incentives for domestic investment to flow to our agricultural sector and the underdeveloped regions of the country. We can do these, Madam Speaker, without going through the route of constitutional amendments,” he added.