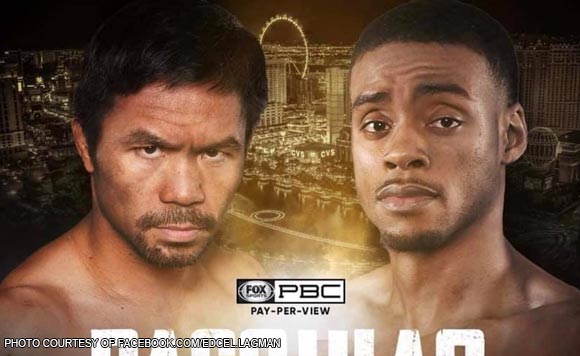 0 21
Share
Want more POLITIKO News? Get the latest newsfeed here. We publish dozens and dozens of politics-only news stories every hour. Click here to get to know more about your politiko - from trivial to crucial. it's our commitment to tell their stories. We follow your favorite POLITIKO like they are rockstars. If you are the politiko, always remember, your side is always our story. Read more. Find out more. Get the latest news here before it spreads on social media. Follow and bookmark this link. https://goo.gl/SvY8Kr

Lagman expressed his admiration for Pacquiao in a Facebook post after the latter said he wanted Errol Spence to be his opponent the next time he steps into the boxing ring.

Pacquiao really showed the courage of a lion and the heart of a champion, he said, as he would be fighting the best, who is also younger and undefeated.

Nobody could deny that Pacquiao is the greatest Filipino boxed of all time, he added.

In picking Spence for what could be his last fight, Pacquiao was showing Filipinos what he meant when he says his fight is for them.

Filipinos should root for him, he said, and added that he himself wants to renew his passport ASAP so he could watch the battle.

Lagman also made it clear that he was purely talking about sports and not politics.

Pacquiao’s politics is a whole other matter!

The courage of a lion. The heart of a champion. Grabe. Sen MP didn’t cherry pick his opponent in Errol Spence. He is fighting the best. A much younger man. And an undefeated champion. Wow.

No one can deny that Pacman is hands down the greatest Filipino boxer of all time. And this is arguably his last fight and his launching pad to boxing immortality. In its strictest sense, ito ang ibig sabihin niya ng “para sa iyo ang laban na ‘to!” As Filipinos, let’s all root for him.