DAR turns over land titles to farmer beneficiaries in CamSur 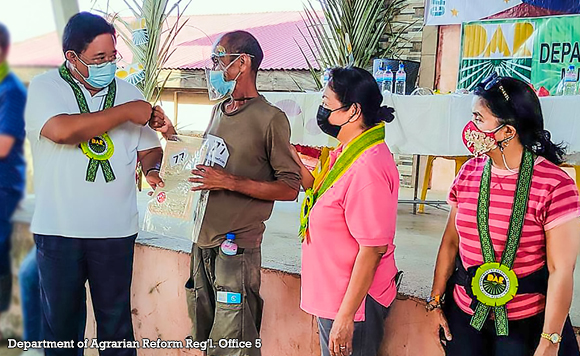 0 14
Share
Want more POLITIKO News? Get the latest newsfeed here. We publish dozens and dozens of politics-only news stories every hour. Click here to get to know more about your politiko - from trivial to crucial. it's our commitment to tell their stories. We follow your favorite POLITIKO like they are rockstars. If you are the politiko, always remember, your side is always our story. Read more. Find out more. Get the latest news here before it spreads on social media. Follow and bookmark this link. https://goo.gl/SvY8Kr

DAR said a total of “665.22 hectares of lands comprising of 379 Certificates of Land Ownership Awards (CLOAs) were awarded to 231 beneficiaries.”

Also in attendance during the activity were CamSur Governor Migz Villafuerte and CamSur Rep. LRay Villafuerte.

The farmer-beneficiaries, according to DAR, were tillers of 331.5 hectares of farmlands through the Serbisyong DAR-to-Door program.

On Tuesday, 255 CLOAs covering 333.7 hectares were distributed to 107 farmers during the ceremony here.

Castriciones said he chose to deliver the titles to the beneficiaries to show that despite the pandemic and the distance, DAR was ready to support them.

“We owe it to our farmer-beneficiaries to deliver what is due them so that they can do their part-–keep food available on our table–especially at this time of the pandemic,” he said.