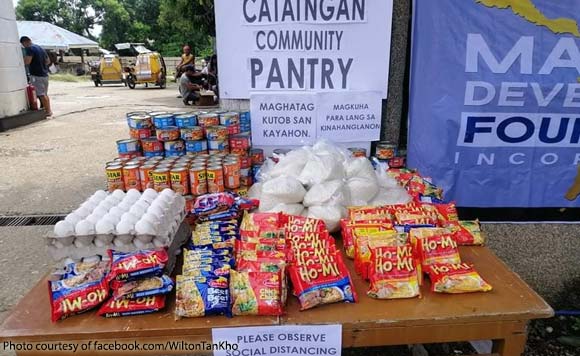 Kindness is contagious, and the effort to put up community pantries that started on Maginhawa Street in Quezon City has reached Masbate.

In a Facebook post, Masbate Rep. Tonton Kho said the Masbate Development Foundation has put up a similar community pantry that offers free food to those who need it.

Kho said the pantry was an act of bayanihan that seeks to provide mutual aid and does not intend to treat each other as charity cases.

He called on the people of Masbate who have generous hearts to coordinate with the foundation if they want to donate items.

It would continue to operate the community pantry for as long as it could, he said.

May the people’s generosity last!

Recently, an act of bayanihan has been circulating online that helped a lot of Filipinos in the midst of pandemic. This is a community pantry that was originated in Maginhawa, Quezon City which eventually spread across the Philippines.

Through the effort of Masbate Development Foundation, Inc., a community pantry is made possible to help our fellow Masbateños, this time a Masbateño version of ‘community pantry’ This act of bayanihan aims to provide mutual aid and help each other out, not treat others like they are charity cases.

At the same time, we are encouraging the people of Masbate who have generous hearts to coordinate with us and be with our common goal which is to help one another in these trying times. You may call MDFI for donations at 09295349716 so that we can continue this humanitarian act until it lasts. You can also message our page for donations to MDFI community pantry,” Kho posted.