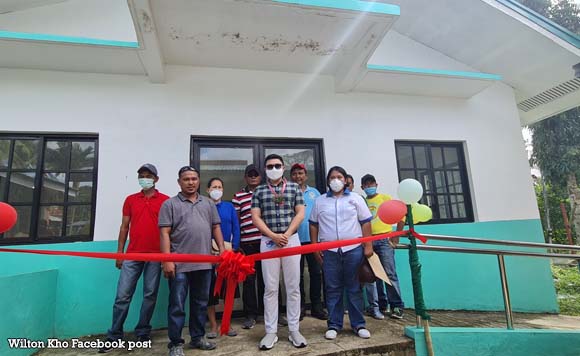 Masbate Rep. Wilton Kho has attended the inauguration of four impact projects in Tan-awan in Placer.

“Four major events transpired in just one day; the Ceremonial Lighting of MASELCO in Sitio Tulingan, Tan-awan, Placer signifies that gone are those darkest nights of our fellow Placerenos due to the absence of electricity,” the lawmaker’s office said.

“Our effort to interpolate the Department of Energy during the budget hearing has already materialized, now their evenings shine with light! The National Electrification Administration has heeded our call to revitalize the total electrification of Masbate Province specially the Third District of Masbate,” it added.

Another one was the blessing of the health station in Tan-awan also took place to “cease the struggle in seeking good healthcare, which will now be within their reach.”

Kho also led the blessing of another Barangay Hall and one classroom building.

“These buildings were provided by our beloved Gov. Antonio T. Kho in the pursuit of helping the community through leadership and education,” said the solon’s office.

“We also acknowledge the two leaders of this barangay, former barangay captain Geronimo Remulta Sr. and former barangay captain Dote Debucol who have reconciled with each other from their previous conflagration to put the needs of the people first. This only shows that when there is unity among leaders, progress will follow,” it added.