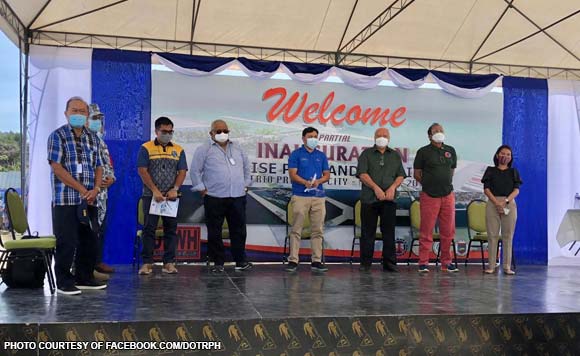 0 131
Share
Want more POLITIKO News? Get the latest newsfeed here. We publish dozens and dozens of politics-only news stories every hour. Click here to get to know more about your politiko - from trivial to crucial. it's our commitment to tell their stories. We follow your favorite POLITIKO like they are rockstars. If you are the politiko, always remember, your side is always our story. Read more. Find out more. Get the latest news here before it spreads on social media. Follow and bookmark this link. https://goo.gl/SvY8Kr

Department of Transportation (DOTr) Secretary Arthur Tugade led the inauguration of the Puerto Princesa Cruise Port, and the groundbreaking of the Coron-Culion Bridge in Palawan yesterday.

In his speech, Tugade highlighted the determined commitment of the Duterte administration to give life and realization to the first marching order of the President—making life more comfortable and convenient for the Filipino people.

Tugade also mentioned that in Palawan alone, the DOTr and the Philippine Ports Authority (PPA) have 17 seaport projects and 9 airport projects.

Meanwhile, DPWH Secretary Mark Villar recognized the Transportation Department’s contribution in Palawan because of its Airport and Seaport projects all over the province.

Together with Secretary Tugade, he also acknowledged the role that local government units (LGUs) play in the fulfillment of projects.

“Marami po tayong infrastructure projects na gagawin para maging masigla uli ang ekonomiya. Iyon po ang pangarap ni Pangulong Duterte that we will come out very strong from this crisis. But we cannot do it without the help of our officials. Hindi rin kaya ng National Government kailangan namin ang local and we hope that you will also give us your full support, as we promise to give our full support to the beautiful province of Palawan,” Villar said.

Palawan 3rd District Congressman Gil Acosta thanked the Duterte administration, for a dream come true because of the Cruise Port.

“This day is a culmination of a dream. A dream that was contracted, I think it was 8 years ago. A dream to have cruise port in Puerto Princesa. Ito, Sec. Mark (referring to the DPWH Secretary, ‘yung budget nito pinagtatalunan pa noong araw eh,” Cong. Acosta noted.

The Congressman likewise recognized attending officials who are true-blooded Palaweños, such as Executive Secretary Salvador Medialdea and Philippine Ports Authority (PPA) General Manager Jay Santiago, as well as Philippine Coast Guard (PCG) Commandant Admiral George Ursabia Jr. who served and was stationed in the province of Palawan for three years.

Puerto Princesa Mayor Lucilo Bayron, meantime, said the Cruise Port and new facilities will have a huge impact in the tourism of the City, putting up 5,000 capacity in Convention Center.