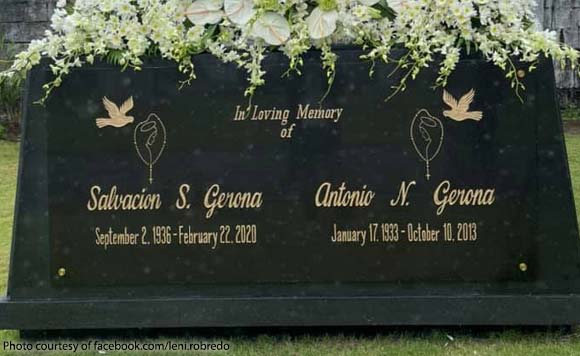 0 67
Share
Want more POLITIKO News? Get the latest newsfeed here. We publish dozens and dozens of politics-only news stories every hour. Click here to get to know more about your politiko - from trivial to crucial. it's our commitment to tell their stories. We follow your favorite POLITIKO like they are rockstars. If you are the politiko, always remember, your side is always our story. Read more. Find out more. Get the latest news here before it spreads on social media. Follow and bookmark this link. https://goo.gl/SvY8Kr

It wasn’t just the pandemic that made 2020 difficult for Vice President Leni Robredo.

Leni Robredo lost her mother a year ago, and she looked back on the agonizing time.

Her siblings are all abroad and she was the only one in the country, she said.

She wanted to bring her mother to Manila, but the latter refused, so she had to keep going back and forth to Naga to be with her.

At the time, she was also busy with the Taal relief operations, she noted.

During her visits to her mother, Robredo said she would hold her hand while updating her siblings about her condition.

She could still remember the moment when her mother’s blood pressure dipped and she flatlined, she said.

The family marked her mother’s death anniversary with a mass in the house where they shared a lot of memories.

Her body has been interred beside her husband and they are together again, she said.

“My Mom’s first death anniversary today. This brings to mind how difficult the first 2 months of 2020 has been.

My Mom was brought to the hospital in Naga just before the New Year. My siblings are all working overseas and I am the only one here. I wanted to bring her to Manila but she refused. That meant, for me, going back and forth to Naga every week to be with her. This was while we were doing relief operations for the Taal eruption victims.

I was by her bedside, holding her hand, while the angels were already summoning her. I was updating my siblings on viber, who took turns visiting her before that.

It is stillheart wrenching until now when I recall how her blood pressure slowly dipped and she flatlined. And it was just the two of us plus her doctors inside the cold, lonely ICU cubicle she has been occupying.

Yesterday, we commemorated her death anniversary one day early with a mass in the house where we all grew up in and which was witness to many happy memories for more than 5 decades. Her body has already been interred beside my Dad and they are finally together again enjoying eternal life,” Robredo posted.