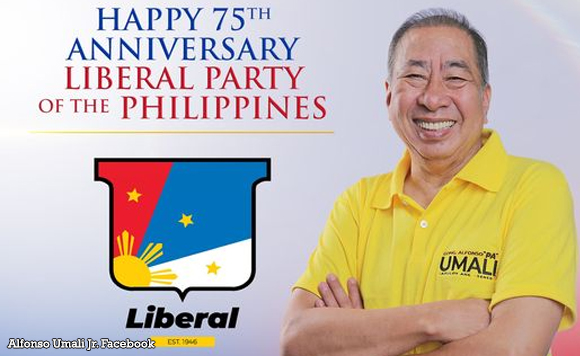 Umali, a stalwart of the LP, said that the party’s principles have transcended through the decades.

“Looking back at the history of the Liberal Party of the Philippines, this momentous day has become historically significant as the LP brought immense changes in the political and development framework of the country. Truly, the noble ideals of the Liberal Party transcend through decades,” said Umali.

“Today, as we celebrate another milestone for the Liberal Party of the Philippines, on its 75th Anniversary, I congratulate each and every one of us who chose to fight for democracy and equality despite the current day adversities,” he said.

The Oriental Mindoro solon also said that may the wisdom and principles of the LP guide them as they continue to lead with “transparency and accountability, with respect to human and civil rights, and under a fair and just rule of law.”

“Cheers for a stronger and even more unified LP. Tuloy lang,” Umali said.

“Thank you very much and warmest regards to all of you,” he added.