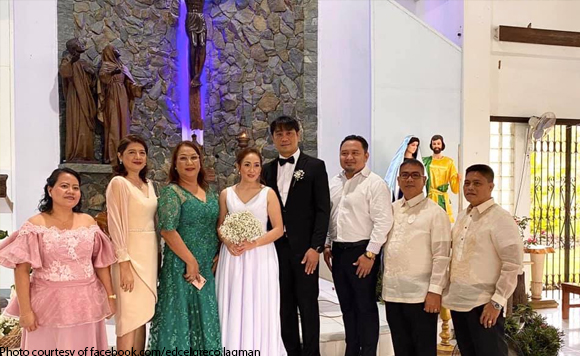 Not Councilors Dino Surtida and Cynthia Fe Belchez Ras, who got married on December 22.

Albay Vice Gov. Grex Lagman was one of the godparents at the wedding and shared his experience on Facebook.

In his post, Lagman said the councilors Dino and Pipay are his good friends, whom he has known since 2012.

They helped him get acquainted with Sto. Domingo when he started permanently residing in Tabaco to prepare for his campaign as Albay representative.

They’ve strengthened their bond through both politics and sports, as Pipay is also a triathlete, he said.

Now, since he is also the godparent of the newlyweds, their lives are even more intertwined!

Perhaps it’s not advisable to mix business with pleasure. But, as far as i’m concerned, there are couples who can definitely mix love with politics! ❤️💪

Yesterday, 22 December 2020, Councilors Dino Surtida and Cynthia Fe Belchez Ras tied the knot. I was invited by them to be one of their godparents. Theirs was my fourth wedding this month! Haha

Dino and Pipay are both my dear friends. We’ve known each other since early 2012. At that time, i was on sabbatical from politics. It was the year I started to permanently reside in Tabaco City to comply with the 1 year residency requirement in order to run for representative of the 1st District of Albay. They helped me get acquainted with Sto. Domingo where they were both elective officials.

Kami ni Dino pirming nagba-basketball. Maski saen basta may kawat asin may court, yaon kame. An apod ko saiya kaito was “Dennis Espino”. Si Pipay, sarong tri-athlete, ka-swimming ko man. Kaya, it was politics and sports that were the foundation of our friendship. I won that election district-wide but lost in Sto. Domingo by 195 votes. Fast forward kan 2019—-i’m sure because of their enduring support—I finally won Sto. Domingo by winning 64% of the vote. I won by 4,242 votes over my rival. Mabalos po, Dino and Pipay! 💪