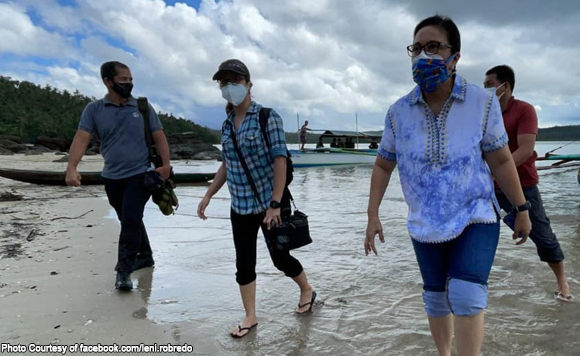 The difficulty of reaching an island devastated by recent calamities was no barrier to Vice President Leni Robredo.

On Facebook, Robredo said that she visited Barangay Daligan in Tinambac, which could only be reached by taking a boat, to bring much-needed assistance.

It is a beautiful island suffering from massive devastation.

She thanked Yvette Fernandez for leading a donation drive among her friends to help the island.

Robredo led the distribution of housing materials to residents who lost their homes to typhoons Rolly and Ulysses.

Near or far, she’ll bring help where it’s needed!

“Visited Barangay Daligan, in the town of Tinambac this morning. It can be reached only by taking a boat from Barangay Cagliliog. Beautiful island but devastation is enormous. Thank you, Yvette Fernandez, for spearheading a donation drive among friends. We were able to distribute housing materials to those whose houses were totally damaged by Typhoons Rolly and Ulysess,” Robredo posted.

Visited Barangay Daligan, in the town of Tinambac this morning. It can be reached only by taking a boat from Barangay…