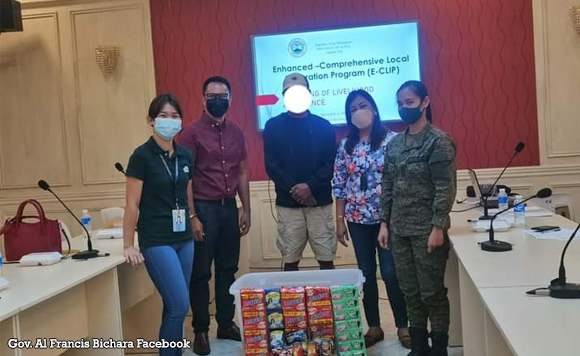 The Albay provincial government has awarded livelihood assistance package to the former Rebels.

The said initiative is in support to the Enhanced Comprehensive Local Integration Program (E-CLIP) and its efforts toward achieving the goal of permanent and peaceful closure of all armed conflicts with non-state armed groups.

“The PGA is committed in providing immediate and long-term interventions to help out the former rebels in Albay, as well as their immediate family members who have surfaced and expressed their desire to abandon armed struggle and become productive members of society,” saif the Capitol.

“We assist them in their economic, social, legal status and security, as well as their psychological rehabilitation needs,” it added.

According to the Capitol, the Albay Enhanced Comprehensive Local Integration Program (E-CLIP) Committee, in partnership with the Department of Trade and Industry (DTI) and Department of Social Welfare and Development Office (DWSD) awarded the Livelihood Assistance Package to the former rebels of Albay.

The beneficiaries received 1 mega box with 5k worth of Sari-sari Store Kits from DTI and a maximum of twenty thousand (Php 20,000.00) check from DSWD, said the Capitol.