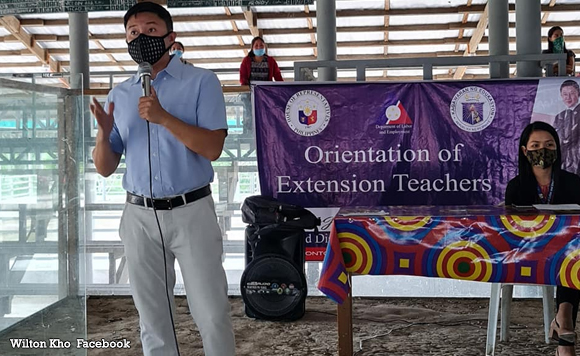 Masbate Rep. Wilton Kho said that the orientation of extension teachers last Wednesday has been successful.

‘Batch 1-Extension Teachers successfully had their orientation held at Kalasangan Hills on December 2, 2020. The orientation talks about the information that is deemed beneficial to them,” said the Masbate solon.

Since the areer opportunity also entails competencies and passion as an educator, they were guided by Rep. Kho and Schools Division Superintendent-Nene Merioles.

“The venue shows that it’s a private area and you might wonder it would have been better if it’s in a bigger and well-lighted one instead,” said the lawmaker.

“We resorted to this idea since this is the only venue we thought social distancing can be strictly followed, implemented and properly executed,” he added.

Meanwhile, to complete the orientation of the remaining batches, a schedule for Batch 2 and Batch 3 is set on December 6.

It will be held at 559 Extension Teachers to be at Cataingan National High School Grandstand on Sunday,

“This is now the new venue for your orientation. For Batch 2, be there at 9AM while 1PM for Batch 3,” said Kho

“Please be there ON TIME for you to sign your Internship Agreement and attendance sheet to be assisted by DOLE staff. This should be done immediately before the orientation starts. Lastly, please bear in mind that ATTENDANCE is REALLY a MUST,” he added..