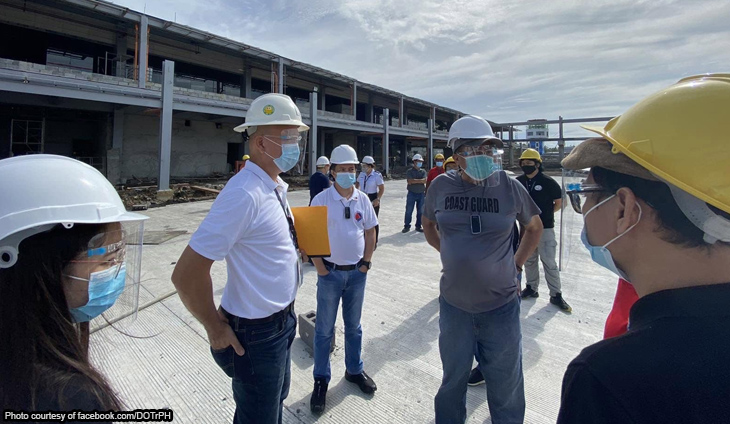 Transportation officials led by Secretary Arthur Tugade have inspected the Bicol International Airport in the aftermath of Supertyphoon Rolly.

Concerned with the impact of Rolly on the on-going construction of the Bicol International Airport, the DOTr Team arrived in Daraga, Albay, last November 6 to personally assess the status of this major transport project under the “Build, Build, Build” Infrastructure program.

Tugade was “keenly monitoring the progress and development of this long-delayed and much awaited project, thus he wanted to see for himself the overall situation and condition.”

The DOTr said that Civil Aviation Authority of the Philippines (CAAP) Director-General Jim Sydiongco earlier reported that the BIA project was fortunately spared by the onslaught of Rolly” sustaining “minimal damages” of torn roofing on its Passenger Terminal Building, and damaged bunkhouses of the site construction workers.

During the inspection, Tugade instructed the Project Management Office and the contractors to make sure that the remaining works will be done as swiftly as possible in order to meet the December 2020 deadline.

“I want this airport to be completed by the end of this year. 24/7 operations must continuously be implemented to ensure timely completion,” Secretary Arthur Tugade said.

Once completed, the BIA can accommodate a total of two million passengers per year, which will boost air traffic and tourist arrivals in the region.

The airport is envisioned to be a prime key in transforming Albay province, and the Bicol region into an economic powerhouse, which the Bicolaños will greatly benefit from for years to come.