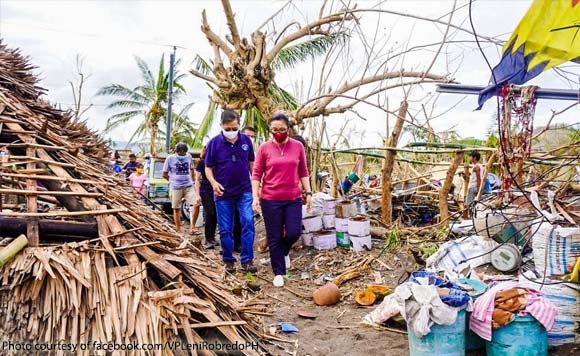 “In Tiwi, we visited Purok 1A in Barangay Bolo, a coastal community. All the houses in that village were totally destroyed. The scenes of residents rummaging through the debris, looking for things that they can still use were very poignant,” said Robredo.

“Residents said they evacuated to a nearby church but the church also lost its roof at the height of the typhoon,” she added.

Robredo also listened to the concerns of the affected residents.

“I was asking them what they most need at the moment. Most of them said, laminated sacks, which they can use as roof and walls for the temporary houses that they will build,” said Robredo.

“Mayor Ami Villanueva and Bgy Capt. Benito Cilot were there and were explaining that they were hoping that a national government housing project that has long been planned will finally come into fruition so that they wouldn’t have to suffer this same fate over and over again,” she added.