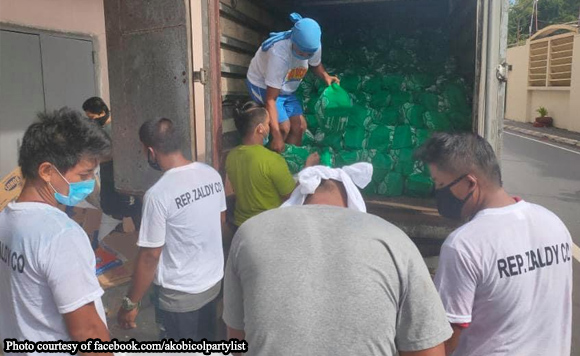 The Ako Bicol Partylist said that it will prioritize food, clothing and shelter to the residents heavily affected by Typhoon Rolly.

Ako Bicol Congressman Zaldy Co said that based on his initial assessment in Albay, a “large swathe of devastation [was] left behind by super typhoon Rolly.”

Co also shared the grief of families who were trapped in their homes. Some, he feared, may have died due to floods or could have been buried by lahar from Mayon Volcano.

“The solon said he will work in tandem with different government agencies to offer temporary shelter to homeless Bicolanos. At the moment, he said his top priority is to provide food, clothing and shelter to typhoon victims,” the partylist said.

The Bicolano lawmaker also said the forecast of the PAGASA was fairly accurate: the typhoon packed maximum sustained winds of 225 kilometers per hour (kph) near the center and gustiness of up to 280 kph when it slammed Bicolandia.

“Since the Bicol Region was just ravaged by typhoon Quinta, it now has very little resources to cope with the devastation wrought by typhoon Rolly. It doesn’t help that Bicolanos are still reeling from the ill-effects of the COVID-19 pandemic” it added.

To help mitigate the situation, Co is no appealing for help from the private sector and various government agencies especially for food, construction materials and financial assistance to rebuild the livelihood of thousands of Bicolanos.