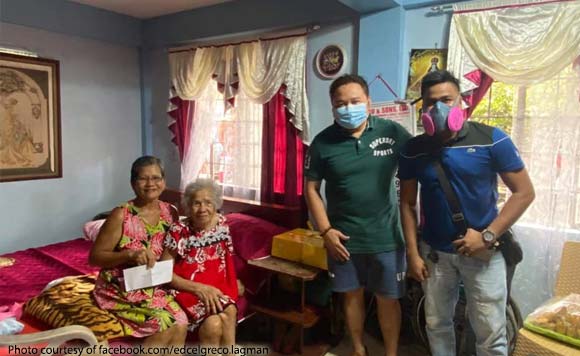 “Today, i am very happy to be with Mrs. Soledad Alagaban Arienda of Barangay Bigaa, Legazpi City as she celebrates her 100th year,” said the Vice Governor.

Joining the governor was SK Chairman of Bigaa Jordan Alpajaro.

“Aside from being in the pink of health (she only eats fish and vegetables), she’s also still very mentally sharp. Her daughter, 70-year old Manay Baby (who looks like she’s in her late 50s and i’m sure it’s because of their genes), asked the birthday celebrant: “what is 7 x 7”? The latter chirpily replied, “49!” Wow, i was impressed,” he said.

Lagman said that the Centenarian Law is being implemented locally via national line agencies like DSWD-Region V and through ordinances.

“The 100k cash gift that the national law mandates to be given to centenarians as they celebrate their 100th year is augmented by local cash gifts given to them. The Provincial Government of Albay and Gov. Al Francis Bichara through the PSWDO give centenatians a 50k cash gift on their 100th birthday,” he said.

“But, more than these pecuniary benefits, what is more important is the acknowledgement that the law gives to centenarians; their contribution to society as sources of inspiration; and how we can all learn from them in living life to the fullest,” he added.

Who says K-pop is just fluff? VP Robredo thanks Kpop…

Who will wash the dishes? Sablayan Vice Mayor Bong Marquez…