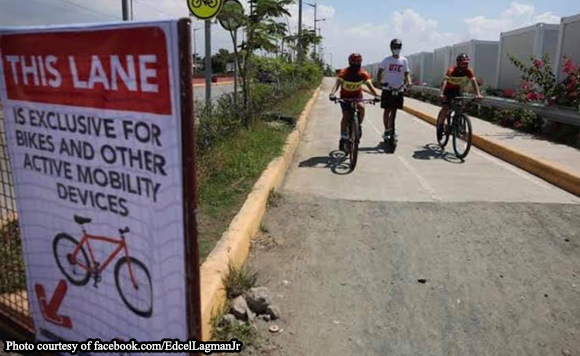 “I am happy to announce that the Sangguniang Panlalawigan ng Albay has approved on third reading last Tuesday, October 13, Proposed Ordinance No. 009-2020,” the Vice Governor said.

The said resolution is entitled: An Ordinance Establishing Active Transport and Network of Cycling Lanes and Improved Pedestrian Walkways to Support People’s Mobility in the New Normal and for the Provision Of Funds for the Purpose.

Lagman said that the ordinance is a product of “participatory governance.”

“2,272 Albayano cyclists and bike enthusiasts actively supported the same through a signature campaign. Their inputs were heard through the associations representing them in the two (2) committee hearings that I (as author of the proposed measure) and BM Rey Bragais (as introducer and chairperson of the Committee on Transportation) conducted,” said the Vice Governor

“Engineers from the three (3) engineering districts in the province and the head of the Albay Public Safety and Emergency Management Office (APSEMO), Dr. Cedric Daep, also attended and gave their well-studied positions, technical know-how and recommendations,” he said.

He maintained that the ordinance is responsive to the thrusts and strategies of the national government as laid out in the 2017-2022 Philippine Development Plan.

“The same mandates infrastructure development, particularly in improving road-based transport through ‘engineering, enforcement, and education.’ Top priority is given to the movement of people and goods for a more efficient use of road infrastructure by supporing the improvement and expansion of non-motorized transport (e.g., bicycle and pedestrian infrastructure) for increased mobility, accessibility, and safety and to encourage more walking and cycling trips,” he said.

The said ordinance is expected to be signed by Governor Al Francis Bichara once it is transmitted and received by his office.

“Govie supported the same ‘in principle’ before the it was filed. This was to secure future support from the LCE of Albay once enacted by the SPA and signed into local law,” Lagman said.

“The same is eventually going to be a win-for-all solution in promoting the health of Albayanos especially those who will opt to bike or walk to and from their places of work and leisure. This ordinance is also expected to promote environment-friendly modes of transport that are inclusive and efficient while ensuring road safety for all road users” he added.