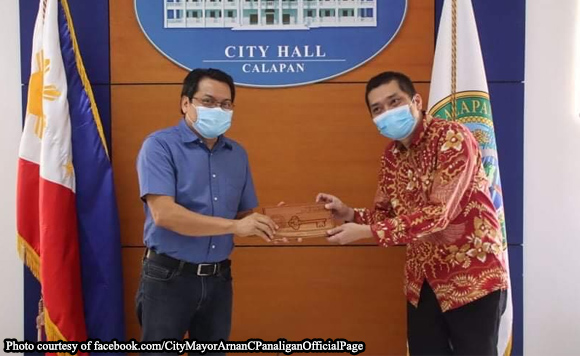 Mayor Arnan C. Panaligan presented the symbolic key to the City of Calapan to the visiting Trade Attache of the Embassy of the Republic of Indonesia, Mr. Lazuardi Nasution.

The event also followed the exchange of tokens between the two officials.

“Mr. Nasution was exploring for possible linkages with local agricultural producers for them to supply the Indonesian markets,” the City Government said.

Mr. Nasution said that Indonesia wants to help the Philippines to close the gap by buying more local agriculture products.

The trade attache was accompanied by Jhon Cabailo of the Oriental Mindoro Chamber of Commerce and Industry.

Also in attendance at the event was provincial director Arnel Hutalla of the Department of Trade and Industry.