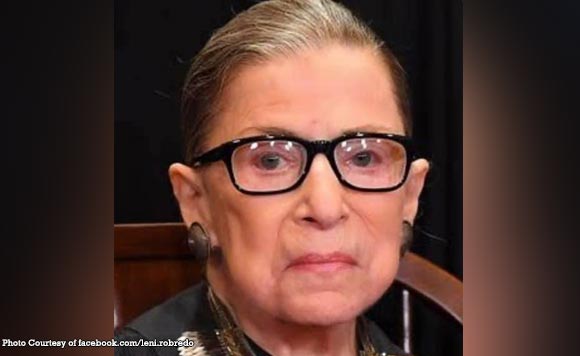 For many women leader, the US Supreme Court Justice Ruth Bader Ginsburg is an icon.

Vice President Leni Robredo is among those who look up to Ginsburg as a feminist and an icon of democracy and justice.

She has been following Ginsburg for many years and has been inspired by her life and legacy.

Ginsburg is someone to emulate as she has stood by her principles and never succumbed to the temptation of power and material things, the VP said.

The late justice did not bow to political pressures and did not flinch in making controversial decisions as well, she added.

While Robredo did not always agree with Ginsburg’s decisions, she believes the world would be a better place with more women like her.

“Today, my facebook feed has been bursting with news of Ruth Bader Ginsburg’s passing. It’s a sad day not just for America, but for the rest of the world. She was a true icon of democracy and was unafraid to go against the tide to fight for truth, equality and justice.

I have been following her for many years now and have truly been inspired by her life and legacy. As public servants, we should be like her – fully committed to the oaths she has sworn to, never succumbing to the temptations of power and material things. As a Supreme Court Justice, she was steadfast and faithful to the Constitution and has never allowed herself to be swayed by political pressures. She was unafraid to make controversial decisions, fully aware that her voice will redound to the benefit of future generations. We may not agree with some of her decisions, but one thing is sure, if all public servants were like her, our world will be fairer, more just and more equitable,” Robredo posted.