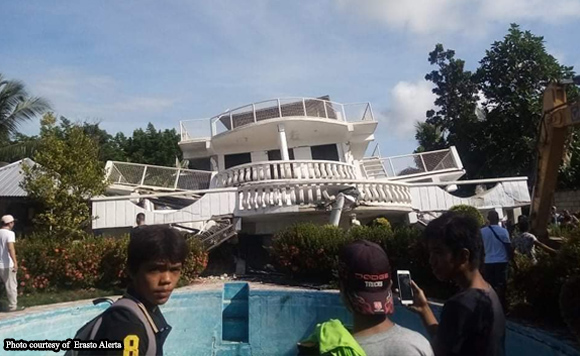 LEGAZPI CITY – A retired police officer died and 24 other people were injured in Masbate when a 6.5- magnitude earthquake jolted the province and other parts of Bicol and the Visayas on Tuesday morning.

Nonielon Bagalihog, information officer of Masbate, in a phone interview said the third district of the province that covers the towns of Cataingan, Palanas and Placer bored the brunt of the tremor.

In Cataingan, Gilbert Sauro, 63, a retired police colonel, died after being buried alive when his three-story concrete residence in Barangay Concepcion collapsed while Ronalyn Condrillon of Barangay Poblacion suffered injury during the quake.

Bagalihog said the Public Attorney’s Office building, public market, police station, some houses, and roads going to Cataingan port were damaged during the tremor based on initial report.

In Palanas, Chris Joe Adigue, chief of the Municipal Disaster Risk Reduction and Management Office (MDRRMO), said an initial report indicated that at least 21 persons were injured in the town.

In Pio V. Corpuz, two persons were reported hurt while in Placer, minor structural damage and no injury was recorded.

Bagalihog said no injury nor damage was reported in the first and second districts of Masbate and these areas “have internet, water and electricity”.

He added that report on the extent of the damage will be updated once they receive information from the different earthquake-affected local government units.

Bagalihog said the provincial government is now preparing first aid kits, medical supplies, rescue vehicles, and the different hospitals for possible casualties in areas that have yet to be reached by the search and rescue teams. (PNA)