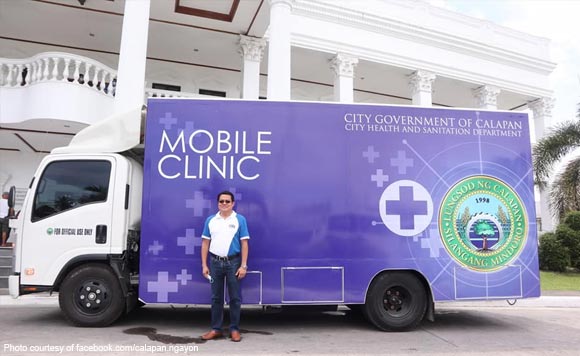 The Calapan City has acquired a new mobile clinic and an ambulance that will be deployed during medical missions to reach rural areas.

According to the city government,the Mobile Clinic has a consultation area and is equipped with X-Ray Room for Digital Radiography with complete set of work station, 1 Laboratory Room for blood extraction, hemoglobin analyzer, urine analyzer, glucometer for blood sugar test and accesories such as microscope, 6 placer centrifuge, nebulizer, weighing scale for infants and adults, BP apparatus and portable oxygen with regulator and humidifier.

“The Mobile Clinic is airconditioned and is also equipped with a 25KVA generator set. The Mobile Clinic will be deployed during medical missions and in the conduct of community medical extension services in barangays, particularly in rural areas,” the city government said.

Meanwhile, the new ambulance will augment the City Government’s fleet of ambulances that are now being used in rescue operations but this unit will be dedicated in conveying patients to hospitals.

The Mobile Clinic and the ambulance will be under the City Health and Sanitation Department headed by Dr. Liza Llanto, said the city government.