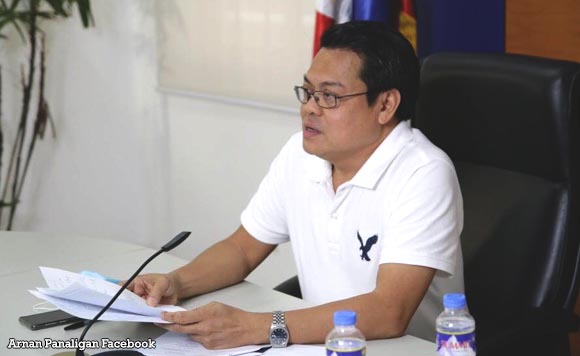 Calapan City Mayor Arnan Panaligan has participated in the League of Cities of the Philippines- Department of Education Dialogue via Zoom, with the theme: “Strengthening the Role of Cities in the Future of Basic Education”

Panaligan, the Secretary General of the League of Cities of the Philippines (LCP) delivered the Synthesis in the LCP-DepEd dialogue which was participated by City Mayors in the country and DepEd officials.

In his Synthesis, Panaligan stressed the following points:

1. There is a common agreement with the stand of DepEd Secretary Leonor Briones that education must continue. There is a need to continue equipping the children and the youth with the knowledge and skills that will make them productive and competitive citizens in the future. Education should also be the priority of everyone.

2. Covid-19 will end at a given time but the harm that will be caused to the children and youth if they will stop schooling will have long term consequences.

3. The Basic Education- Learning Continuity Program (BE-LCP) of DepEd will ensure that the children and youth will continue to receive education in the time of pandemic crisis while protecting the health and safety of the learners, teachers and school personnel.

4. The BE-LCP will necessitate streamlining K-12 to the most essential learning competencies and will involve multiple learning modalities.

5. In the implementation of BE-LCP, financing will be one of the major challenges particularly on how to cover the costs of modules and other learning materials. The School Board Budgets of most cities are not enough to finance this expenditure. Hence, there is a need to explore other financing options.

6. For low risk cities under modified general community quarantine, there are suggestions from City Mayors for DepEd to allow face to face classes considering that in many areas especially in rural barangays, the number of learners in various grade levels are quite minimal ranging from 25 to 35, hence, distancing can be easily and properly observed in a classroom setting. The one size fits all formula should not be applied in the entire country.

7. To ensure the continuity of learning for children and youth, there is an urgent need for strong partnership among DepEd, City Governments, development partners and other stakeholders. Mayor Panaligan cited an old African proverb, “It takes a village to raise a child” to stress his point that it will take all stakeholders in a bayanihan spirit to educate the children in this challenging times.

On the other hand, the DepEd was represented by Undersecretary Annalyn M. Sevilla.

Continue Reading
Department of EducationLeague of Cities of the Philippines- DepED DialogueMayor Arnan Panaligan
0
Share
Politiko would love to hear your views on this...
Trending News
More Stories