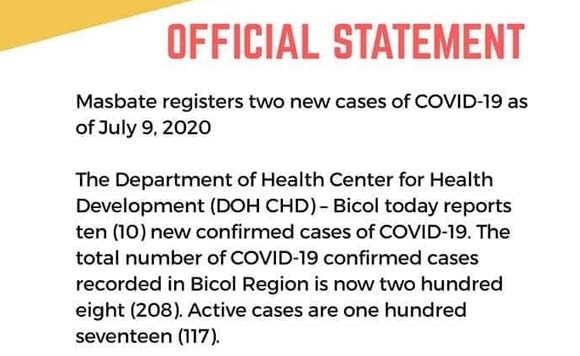 Masbate continues to record more COVID 19 cases, but Rep. Tonton Kho says the province is able to manage the situation.

The patients, who were from Mandaon, are now in quarantine in the proper facilities, he said.

Officials are also conducting further contact tracing. The two new patients were identified and tested after contact from an earlier positive case, he said.

In the meantime, the public should continue to observe the proper health protocols, he said.

Let’s continue to be careful!

“Additional 2 Covid-19 Cases in the province of Masbate.

Two New patients were tested and was confirmed positive through Swab testing. Both Patients are from Mandaon, Masbate.

Rest Assured that these patients are QUARANTINED in the proper facilities of the LGU involved. Upon arrival at the Masbate Port, these patients were fetched by the Mandaon MDRRMO Vehicle (used only for LSIs) and were brought directly to the quarantine Facility.

Rest assured that the Masbate Provincial IATF is already conducting Contact tracing. These patients were identified through contact tracing of the 1st positive cases from aroroy. All LSIs that were in direct contact with the Masbate#01 and Masbate #02 have already undergone swab tests. The first batch of results were already released which included the positive covid-19 patients that were announced. We are still waiting for the next batch of results.