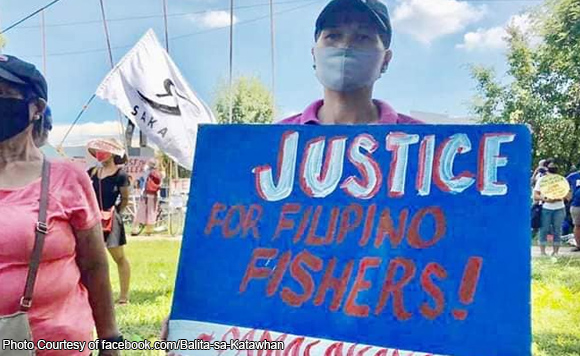 0 73
Share
Want more POLITIKO News? Get the latest newsfeed here. We publish dozens and dozens of politics-only news stories every hour. Click here to get to know more about your politiko - from trivial to crucial. it's our commitment to tell their stories. We follow your favorite POLITIKO like they are rockstars. If you are the politiko, always remember, your side is always our story. Read more. Find out more. Get the latest news here before it spreads on social media. Follow and bookmark this link. https://goo.gl/SvY8Kr

Philippine Coast Guard (PCG) Commandant, Vice Admiral George V Ursabia Jr has met with the families of the 14 victims of the sea collision at the vicinity waters off Barangay Tayamaan, Mamburao, Occidental Mindoro this morning, July 8.

VADM Ursabia said during the meeting with the families that even though the full search and retrieval operations ended yesterday, personnel of the PCG Station in Occidental Mindoro will continue in actively monitoring the incident area and nearby coastal communities.

VADM Ursabia also assured them that mobile patrol operations along the shoreline of Mamburao, Occidental Mindoro will be sustained to locate the whereabouts of the victims.

The PCG also revealed that aside from filing a criminal complaint for reckless imprudence resulting in multiple homicide and damage to property against the owner, master, and officers of the Hong Kong-registered bulk carrier, MV Vienna Wood, they also filed a motion to prevent its crew members from returning to China while the probe is ongoing.

The PCG Commandant guaranteed the families that a hold departure order against MV Vienna Wood will be issued this week to ensure that said bulk carrier will remain under the custody of the Philippines while justice is yet to be served.

VADM Ursabia also refuted the allegation that some of the victims were being kept inside the bulk carrier – the reason why no signs of their lives were found in the vicinity waters.

During the meeting, the Irma Fishing and Trading Inc. and the affected families also expressed their intention to file a civil case against MV Vienna Wood.