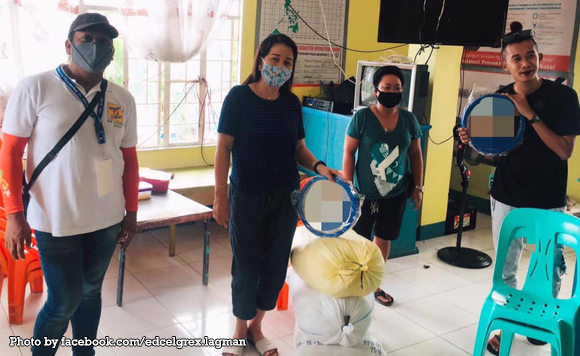 Albay Vice Governor Edcel Grex Lagman has mobilied his coordinators in the province to distribute food packs to the frontliners-barangay officials.

“Starting yesterday, my dedicated and industrious coordinators in Albay started my “food packs distribution” to frontliners-barangay officials. Each coordinator led a team of 10 volunteers and directly gave the packs to all the punong barangays of the LGU under his/her jurisdiction,” said the Vice Governor.

Lagman said that his team has so far completed or is in the process of completing the municipalities of Polangui, Libon, Oas, Ligao City, Pio Duran, Jovellar, Guinobatan, Camalig, Daraga, Legazpi City and Manito.

According to the politiko, this is to ensure that all barangay officials-members of the Barangay Health Emergency Response Teams (BHERTs) will be given food packs.

“I focused on having only the frontliners-barangay officials as beneficiaries of this food pack distribition effort because they are exempt from the Social Amelioration Program (SAP) of the DSWD and allied monetary benefits from DOLE even as they have been working on the frontlines since March 15,” he said

“While BHWs, BNS and tanods are now qualified beneficiaries under the SAP, i still included them because they all only receive allowances and not salaries. However, many of them waived their food packs and gave the same instead to the most vulnerable families in their barangay,” he added.

Lagman said that this is the reason why he considers them as heroes in fighting COVID-19.

“These are certainly the reasons why we should celebrate the acts of heroism of our barangay officials-frontliners and acknowledge their collective efforts in fighting COVID-19 in Albay—-on the frontlines of this war,” Lagman said.