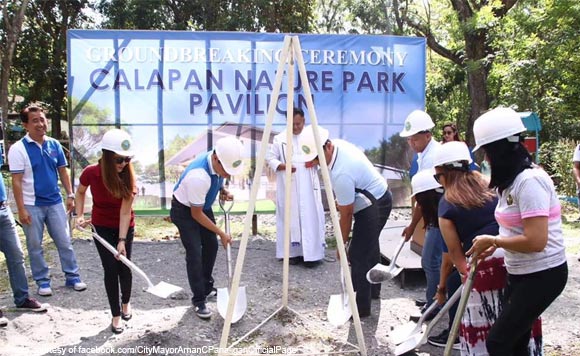 Calapan City Mayor Arnan Panaligan has spearheaded the groundbreaking rites for the construction of the Park Pavilion.

It is one of the most important projects of the city government which will be constructed inside Calapan Nature Park in Bgy. Bulusan.

“The pavilion has a seating capacity of 1,500 to 2,000 persons. It will serve as a venue for various events such as social receptions, weddings, anniversaries, seminars, reunions and other activities,” said the mayor’s office.

“The project is funded by the City Government of Calapan,” it added.

Meanwhile the Calapan City LGU also extended help to the residents of Mataas na Kahoy, Batangas who are victims of Taal Volcano eruption.

“In response to the letter of Mayor Janet Magpantay Ilagan of the Municipality of Mataas na Kahoy in Batangas appealing for assistance for the town residents affected by the Taal Volcano eruption, the City Government of Calapan extended assistance to the municipality in the form of rice and food items worth Php 1,000,000.00” said the mayor’s office.

The assistance was personally handed over by Mayor Panaligan to Mayor Janet Ilagan and Vice Mayor Jay Ilagan at the Municipal Hall of Mataas na Kahoy.

“The entire town of Mataas na Kahoy is covered by the 14 km radius declared as danger zone when the volcano erupted,” Panaligan’s office said.