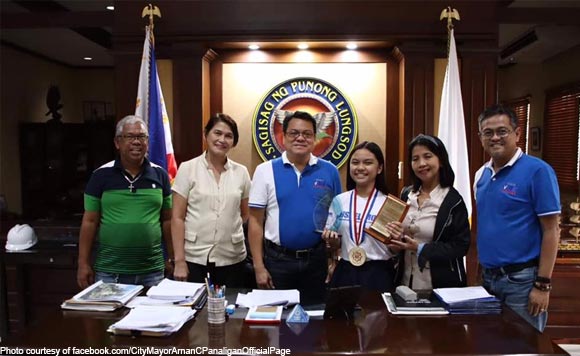 Panaligan welcomed in his office Jamila Daphelene S. Aceveda, a grade 6 pupil from Adriatico Memorial School, for being the national champion in the Iispel Mo: Pambansang Paligsahan sa Ispeling, a spelling contest in Filipino.

The said competition was sponsored by the Komisyon ng Wikang Filipino held at the University of the Philippines.

“Jamila obtained a rating of 95 out of 100 finishing far ahead of the delegates from Calabarzon Region (60) and National Capital Region (50),” Panaligan’s office said.

“Jamila will pursue her junior high school at the Philippine Science High School in Batangas City,” it added.

“A number of these police officers will be assigned to the Calapan City Police Station,” the mayor’s office said.