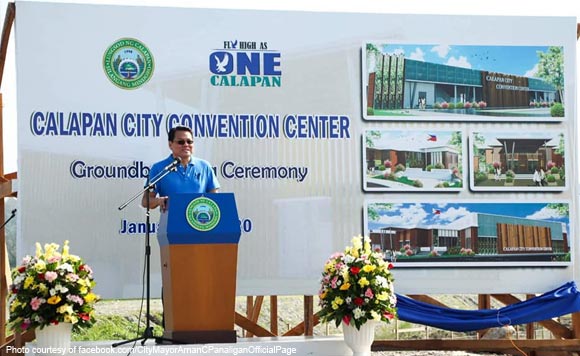 Mayor Arnan Panaligan has led the groundbreaking ceremony of a landmark project of the city government — a convention center.

The Mayor’s office said that the Calapan City Convention Center will be the first of its kind in Oriental Mindoro province.

“City Mayor Arnan C. Panaligan led the groundbreaking ceremonies for the construction of the Calapan City Convention Center, the first convention center in the whole province of Oriental Mindoro,” the mayor’s office said.

The Calapan City Convention Center will be constructed in Bgy. Tawiran.

Mayor Panaligan said that the construction of the Calapan City Convention Center “will propel the development of tourism in the city and will position it as a destination for large meetings, conferences, seminars, exhibitions and conventions.”

Meanwhile, last Friday, Mayor Panaligan has welcomed the staff of SPED Love and Care Without Borders at the city hall.