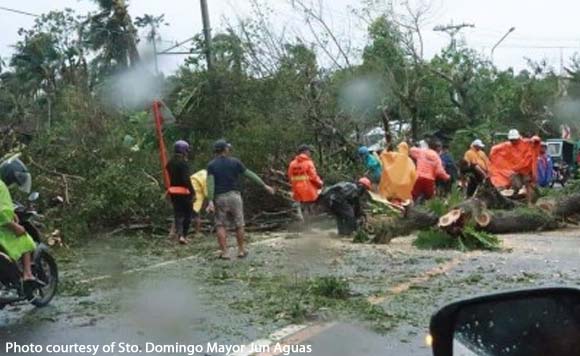 LEGAZPI CITY — Roads from mainland provinces and municipalities of the Bicol Region going to Metro Manila are currently not passable due to fallen branches and uprooted trees caused by Typhoon Tisoy.

Office of Civil Defense (OCD) Regional Director Claudio Yucot, in an interview on Tuesday, said based on initial reports from the different Provincial Disaster Risk Reduction Management Offices (PDRRMO) in the region, massive clearing operations in Camarines Sur, Albay and Camarines Norte are being conducted.

“For Albay, in District 1 all national roads and bridges are passable as of 4 a.m. and still waiting for updates, while for Albay District 2 and 3, ongoing clearing operations along Daang Maharlika Daraga-Legazpi are being conducted. For Camarines Sur, in Nabua town, water level is being monitored, in Camarines Sur, District 2 Danao-Pasacao and Milaor-Minalabac-Pili impassable due to fallen and uprooted trees also with District 3 some national roads are impassable. For Camarines Norte, ongoing clearing operation,” Yucot said.

Based on a report, as of Dec. 2, there were 88,664 families or 353,707 individuals housed in evacuation centers in various parts of Bicol, broken down as follows:

Yucot added that 6 buses, 53 trucks and a cumulative 357 inidivuals are currently stranded along the Maharlika Highway in Irosin, Sorsogon.

The OCD has initially reported that electric power in the provinces of Catanduanes, Albay, Camarines Sur and Sorsogon have yet to be restored while telecommunications signal interruption in Catanduanes were reported.

Yucot urged the public to help the government in coordinating with their barangay officials in the clearing operations to facilitate immediate post-disaster operations.

Asked for the damages assessment, Yucot said they are still consolidating data since they are still waiting for the complete assessment report from the other provinces hit by Typhoon Tisoy, which made landfall in Gubat, Sorsogon at 11 p.m. on Monday. (PNA)