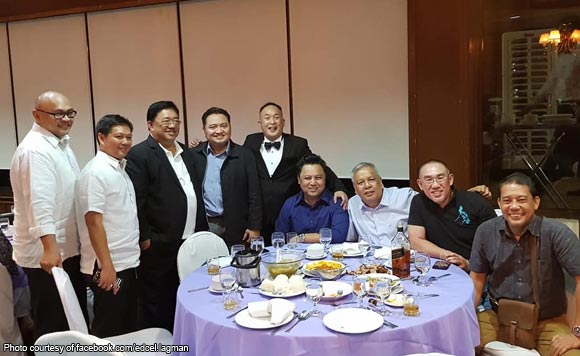 Law school was no walk in the park, but Albay Vice Gov. Grex Lagman was happy to have spent it with people he could rely on.

Lagman recently attended a reunion with the law school classmates he spent four semesters with, and reminisced about the good old days.

On Facebook, he recalled that their days were filled with eating, studying, drinking, praying, and yet more studying.

With all their time spent on studying, it was lucky they were able to form lasting friendships, he said.

And it looks like the ties held because they got to see each other again after so many years.

Many of them had gone on to bigger things, including serving in the government’s various branches, he said.

But while they have lofty titles in their jobs, they seemed to revert back to the students they were during their reunion.

This is the beauty of such gatherings, that it allows them to go back to their roots, he said.

Now, he is looking forward to more reunions!

Spent four (4) semesters with these amazing bunch of law students! All we did was to “eat,study…sleep,study…drink,study…play,study…pray,study”. Pero ito ang mas malapit sa totoong buhay namin noon: “Study and Study” ad infinitum ad nauseam na it’s short of a miracle that we were still able to form lasting friendships. ❤️

And the titles that they have now? Just icing on the cake. Mga secretary at undersecretaries sa iba’t-ibang departamento ng executive; members of Congress; mga judges sa RTC, MTC, etc.; mga state and special prosecutors; private practitioners of note; solicitors; committed public attorneys, law professors at, siyempre, mga lingkod bayan (*ahem ahem* 😃). Everyone of them knows that the prefixes before their names are just superfluous honorifics.

Kase sa reunions, balik lahat kame sa pagiging estudyante ng batas. All of us are “wide-eyed wanderers” again (sorry, Sir Elton John). And this IS the real beauty of reunions—-going back to your roots.☺️ Maraming salamat ule Sec. John Castriciones of the Department of Agrarian Reform (DAR) for hosting dinner for us at the historic Club Filipino.