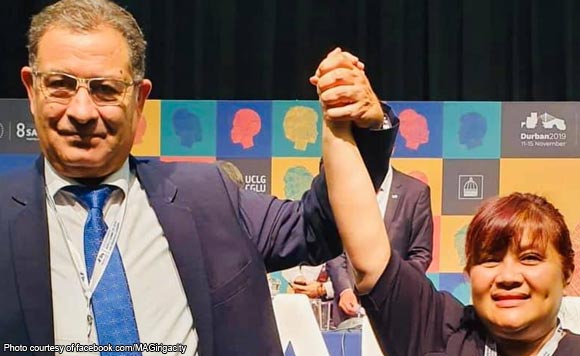 0 632
Share
Want more POLITIKO News? Get the latest newsfeed here. We publish dozens and dozens of politics-only news stories every hour. Click here to get to know more about your politiko - from trivial to crucial. it's our commitment to tell their stories. We follow your favorite POLITIKO like they are rockstars. If you are the politiko, always remember, your side is always our story. Read more. Find out more. Get the latest news here before it spreads on social media. Follow and bookmark this link. https://goo.gl/SvY8Kr

Iriga Mayor Madelaine Alfelor has achieved a milestone by being named treasurer of the international group United Cities and Local Governments World.

Alfelor shared the good news on Facebook, and noted that she is the first Filipino woman from Iriga to hold the post.

The group includes members from 156 countries, so being picked for the post was an honor for her.

She thanked the people who helped her get the spot in the prestigious organization, including her family and the people of Iriga.

“TREASURER of UCLG WOLRD❤️.I never dream to be with the elite group of a prestigious organization in the world UCLG WORLD with 156 countries, 342 world council and 116 ex bureau members from Africa, Asia Pacific, Eurasia, middle east and west asia, Latin Americ, North America, Europe. Due to persistence and hardwork it paid off, First FILIPINO WOMAN from IRIGA CITY to become an officer/TREASURER of the UCLG WORLD ?????????#proudpinoy

Allow me to thank all the people who were the instruments of this success.. MY FAMILY where i get my strength, LGU FAMILY, to all IRIGUENIOS who believed in me, SEC. Gen BERNADIA IRAWATI TJANDRADEWI, Atty. VioletA Seva, Mayor BING LEONARDIA my president of LCP, Mayor Bernard Dy of Isabela city ,Mayor Abby Binay of Makati city, Mayor Li Mingyuan of Xian city, China; Mayor Her Tae-jeong of Daejoon city, Korea, Governors Association of Korea, Municipal Assoc of NEPAL, NARMIN, ADCCN, RALGA- Africa, Mayor Christian De Candia of Montevideo, Uraguay; Mayor Dave Cull of Dunedin city, New Zealand, Mayor Suzuki of Hamamatsu City, Mayor Tri Rismaharini of Surabaya, Indonesia, My UCLG ASPAC family, KN family and above all GOD for all the blessings he has given us this year 2019, nagpahabol pa iya, couldnt ask for more.. KANATO PO ADI MGA TAGA IRIGA… ❤️❤️❤️#proudiriguenio???,” Alfelor posted.