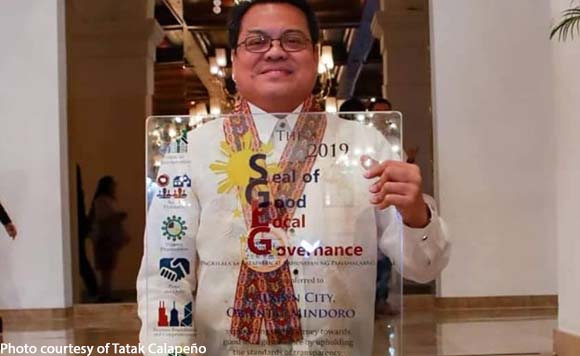 0 390
Share
Want more POLITIKO News? Get the latest newsfeed here. We publish dozens and dozens of politics-only news stories every hour. Click here to get to know more about your politiko - from trivial to crucial. it's our commitment to tell their stories. We follow your favorite POLITIKO like they are rockstars. If you are the politiko, always remember, your side is always our story. Read more. Find out more. Get the latest news here before it spreads on social media. Follow and bookmark this link. https://goo.gl/SvY8Kr

For the third straight year, Calapan City has been conferred by the Department of the Interior and Local Government with the Seal of Good Local Governance.

Panaligan was joined by Vice Mayor Gil Ramirez in accepting the newest accolade of the city.

“The SGLG is conferred only on local government units that passed the stringent criteria in the following areas: Financial Administration, Disaster Preparedness, Social Protection Programs, Peace and Order, Business Friendliness and Competitiveness, Environmental Protection and Management and Tourism, Culture and Arts,” the Mayor’s office said.

“Calapan City PASSED all the seven criteria,” it added.