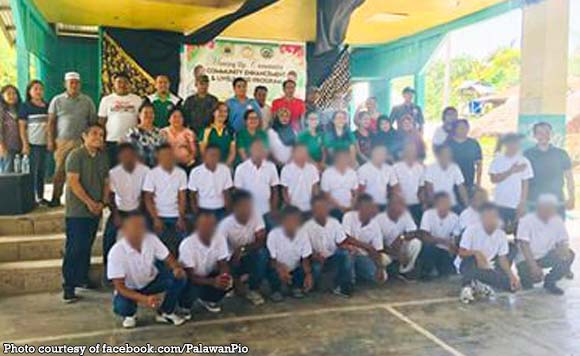 0 276
Share
Want more POLITIKO News? Get the latest newsfeed here. We publish dozens and dozens of politics-only news stories every hour. Click here to get to know more about your politiko - from trivial to crucial. it's our commitment to tell their stories. We follow your favorite POLITIKO like they are rockstars. If you are the politiko, always remember, your side is always our story. Read more. Find out more. Get the latest news here before it spreads on social media. Follow and bookmark this link. https://goo.gl/SvY8Kr

A total of twenty five Recovering Drug Surrenderees from several sitios in Balabac town in Palawan have completed their Community Enhancement and Livelihood Program.

Present during the activity were Raymundo Quicho representing Vice Governor Dennis M. Socrates, Teri Acda from the Office of the Governor and Shiela Reyes from the Department of Health.

The CELPDS is a program of the Provincial Government as a support to the Oplan Tokhang of the Philippine National Police.

Post Views: 0
Continue Reading
Community Enhancement and Livelihood ProgramDepartment of the Interior and Local GovernmentDrug surrenderees
0 276
Share
Politiko would love to hear your views on this...
Trending News
More Stories