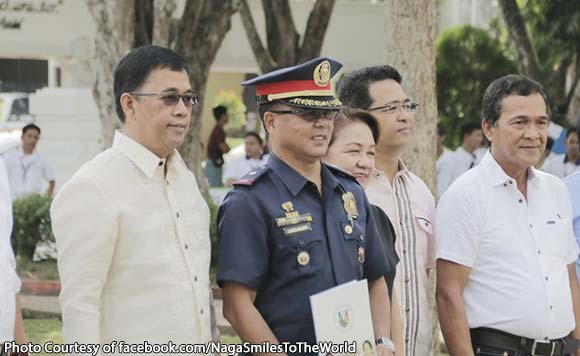 0 1,350
Share
Want more POLITIKO News? Get the latest newsfeed here. We publish dozens and dozens of politics-only news stories every hour. Click here to get to know more about your politiko - from trivial to crucial. it's our commitment to tell their stories. We follow your favorite POLITIKO like they are rockstars. If you are the politiko, always remember, your side is always our story. Read more. Find out more. Get the latest news here before it spreads on social media. Follow and bookmark this link. https://goo.gl/SvY8Kr

The City Government of Naga City has commended the police for successful buy-bust operations which resulted to confiscation of P4.3 million worth of illegal drugs.

“KUDOS! For the successful apprehension of drug pushers and confiscation of 700 grams of shabu with street value of 4.3 million during an anti-drug buy-bust operation in Barangay Balatas last September 3,” the Naga City government said.

Naga City Mayor Nelson Legacion personally handed the certificate of recognition to the police this morning.

Meanwhile, the city government also hailed Hillary A. Fajardo during the flag raising ceremony earlier today, for her selfless and noble act of helping a suicide victim.

“Ms. Hillary offered her own car to the victim and her father which she happened to pass by along the road and drove them herself immediately to the hospital that paved way for the victim to be revived,” the city government said.